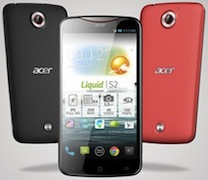 Ahead of officially launching it at the IFA 2013 (scheduled to begin later this week), Acer has unveiled its new phablet offering called Liquid S2. The device sports a 6 inch display and is the first phablet from the company to come with 4K Ultra HD recording. The company also unveiled Iconia A3, a 10 inch Android tablet and a refreshed Aspire R7 notebook- with new touch apps and a new Acer Active Pen. Here is a look at the specifications of the devices.

The phablet sports a 6 inch IPS LCD full HD capacitive touchscreen display (1080x1920 pixel resolution) with 367 ppi pixel density, and runs on the latest Android 4.2.2 Jelly Bean operating system. It is powered by a 2.2 GHz Quad-core Snapdragon 800 processor and has 2GB of RAM. In terms of internal memory, users get 16GB of internal storage that can be further expanded an additional 128GB (nice!) with a microSD card.

The smartphone packs a 13 megapixel auto-focus rear camera that can record 4K Ultra HD videos at 30 frames per second and a 2 MP front facing camera that can also record full HD videos at 30 fps. The camera also comes with several enhancements including BSI Sensors and LED Ring Flash for sharper pictures in low light environments. A 'favourite' mode lets users create up to five profiles with customised effects and capture modes. Users can also control exposure with one finger focus and exposure adjustment (for clear and bright shots).

On the connectivity front, the device has Bluetooth 4.0, Wi-Fi (Wi-Fi Direct), 3G and 4G LTE (depending on the region), and it also comes with a microSD card slot and a microUSB port. The dimensions of the device are 166mm x 86mm x 9mm, but its exact weight has not been disclosed by the company. It comes with GPS (with A-GPS support), Near Field Communication (NFC) and Stereo FM with RDS. It will be available in black and red colours and the company has provided a 3,300 mAh battery in the device.

The Liquid S2 is designed with soft curves, and the company has also added dual speakers powered by Dolby Digital Plus for enhanced sound. Pricing and availability of the phablet is expected to be disclosed at the time of the official launch.

The Iconia A3 tablet sports a 10.1-inch WXGA display (1280 x 800 pixel resolution) with IPS technology and 149 ppi pixel density, and runs on the Android 4.2 operating system. It is powered by a 1.2GHz quad-core cortex A7 processor, and in terms of internal memory, users will have a choice between 16 and 32GB models with additional microSD expansion.

According to the company, the tablet will deliver up to 11 hours of HD video playback, and will debut Acer's IntelliSpin technology- that expands the tablet's screen image rotation feature. So even when lying flat, the screen image will rotate to match the user's orientation when turned.

The company has also unveiled a refreshed Aspire R7 notebook (Aspire R7-572) that runs on Windows 8.1 operating system, is equipped with an Acer Active Pen and features a set of Acer Touch Tools apps. While Acer Active Pen enables users to enjoy greater accuracy and comfort while writing and drawing, Acer Touch Tools apps include MemoryBinder- enables users to put memories together by arranging photos, and adding paint brush effects and personal messages to them; Screen Grasp- allows any image to be captured, personalised and shared on social networks or pasted to documents; and Scrapboard- makes it easy to collect images and ideas from the web, among others.