The PC monitor market in India witnessed a 5 per cent growth in terms of sell-throughs in the quarter ended June 30, 2013 compared with the first quarter, driven mainly by offers and schemes floated by vendors, according to a report by CyberMedia Research.

The rise in the total sales volume makes it all the more significant, as PC monitor vendors had increased the prices of monitors up to 5 per cent due to a slew of factors, including the sharp depreciation of Indian rupee.

LG emerged as the leader with a 26 per cent share of unit sell-throughs in Q2, followed by Acer (25 per cent), while Samsung grabbed the third position with 20 per cent share. The southern India contributed a hefty 35 per cent of the total sales volume. 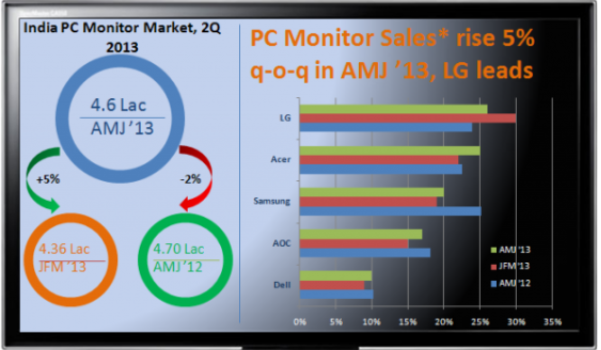 The report noted that large volume of parallel imports for Samsung and LG resulted in a steep decline in sell-throughs in the first quarter. Samsung, however, managed to recover some of the lost ground and recorded a growth of 9 per cent in sell-throughs in Q2 compared with Q1. Effective front-end sales incentives enabled partners to bring down prices for Samsung monitors despite the price increase. This tactic also helped close the window for parallel imports, the report noted.

"Decline in parallel imports of PC monitors and typical market behaviour saw partners stock more units before the impending price hike on imports due to sharp depreciation of Indian rupee. These two reasons were largely responsible for the growth in sell-throughs in India during the April-June quarter," said Sumanta Mukherjee, lead analyst at CMR.

The fall of the Indian currency vis-Ã -vis the US dollar and other major currencies stoked fears of inflation and spread panic among investors and the partner community. The tumbling rupee forced vendors to increase prices ahead of the festive season.

Samsung and LG increased their prices 3-4 per cent and 5 per cent, respectively, in the second quarter, while Acer raised prices at the fag-end of the quarter. While Samsung managed the demand with incentives to partners, LG was the most affected, with its market shares declining 4 per cent, on a quarter-on-quarter basis.

The price difference between assembled PCs and branded PCs has been continually narrowing and more consumers are opting for significant benefits offered by branded PC vendors such as extended warranty. With an increasing number of branded players in the marketplace, assembled PC shipments have grown at a relatively slower pace. While the assembled desktop PC market has declined rapidly over the past two years, most partners are hopeful that the decline will be arrested, and the next two years may see a flat market.

"Tier II and Tier III towns have a demand pattern where Indian consumers recycle old PCs or upgrade them in order to make effective use. Homes, schools, colleges and SMBs in these geographies still prefer the assembled PC. The gaming segment remains a bright spot for PC assemblers as well as for branded PC players," Mukherjee said.