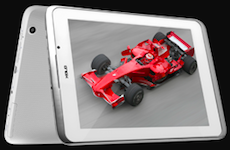 After launching its quad-core offering XOLO Play for Rs 15,999 in July this year, Lava's sub-brand XOLO has entered the Indian tablet market. For the same, the company has launched XOLO Tab (its first tablet offering), which runs on the Android operating system and is powered by a 1.2 GHz quad-core processor. Targeting the mid-price range segment, the company has priced the device at Rs 13,499. Here is a look at its specifications.

This tablet features an 8 inch IPS touchscreen display (768Ã—1024 pixels resolution) and 160 ppi pixel density. It is powered by a 1.2 GHz Adreno 203 quad-core processor and has 1GB of RAM. The device runs on the Android 4.1. Jelly Bean operating system and the internal memory of the device is only 4 GB (only 2.5GB available to the user), but can be expanded up to 32 GB with a microSD card.

On the camera front, this one has a 2 mega pixel rear camera and a 0.3 MP front-facing camera for video calling. In terms of connectivity, the device has Wi-Fi (with Wi-Fi hotspot), Bluetooth 3.0 and 3G, as well as a microSD card slot and a microUSB port.