Samsung launches Galaxy Golden flip phone for Rs 51,900; is it worth a buy? 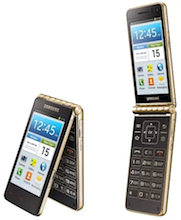 After unveiling the same earlier this year, Samsung Electronics has launched Galaxy Golden â€“ a premium flip phone with a golden coloured accent â€“ in the Indian market. The phone sports dual screens (one on the inside and the other one on its flap) and provides users with a touch and type smartphone experience. While the outer screen enables the users to make and receive calls, flipping the phone open brings up the inner screen and a 3x4 keypad.

While the company has priced the device at Rs 51,900, it is available for purchase online for as low as Rs 49,900. Here is a look at its specifications.

Galaxy Golden has an 8 megapixel auto-focus rear camera with LED Flash that can record full high definition videos (1080p) at 30 frames per second, and a 1.9 MP front facing camera for video calling. On the connectivity front, the device has Bluetooth 4.0, Wi-Fi (with Wi-Fi hotspot), 3G, and it also comes with a microSD card slot and a microUSB port.

The device also comes with 'Easy Mode', which comes with large fonts and icons and enables the users to access and search apps quickly. It also highlights certain features on the device like favourite apps and easy settings, which makes it simpler to use the phone. Another feature is the 'Hidden Receiver' that allows users to take calls without opening the folder and provides high quality sound in noisy areas, according to the company.

While the specifications of the device are decent, they are no where decent enough to command an almost Rs 50,000 price. We feel that only consumers with very deep pockets, and a die-hard passion (with especial stress on die-hard) for flip phones will opt for this.

Otherwise why would anyone spend so much on a flip phone with decent specifications when in the same pricing, you can get your hands on smartphones with awesome specifications like HTC One (Rs 48,999), Samsung Galaxy Note 3 (Rs 46,899), Nokia Lumia 1020 (Rs 47,222), and the soon to be launched iPhone 5s and 5c.