Google Nexus 5 coming to India for a starting price of Rs 28,999 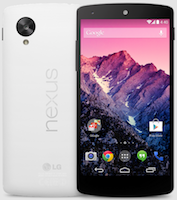 Search giant Google has finally launched the next Nexus smartphone (rumours about the same were doing the rounds for some time now), along with the latest version of its Android operating system nicknamed KitKat. The device, built in partnership with LG, is called Nexus 5 and runs Android KitKat out of the box.

In terms of pricing, the 16GB model will be available for Rs 28,999, while the 32GB model has been priced at Rs 32,999. While the smartphone has already been launched in countries like the US, Canada, the UK, Australia, France, Germany, Spain, Italy, Japan and Korea, an exact India launch date is not available of now.

According to the company, the smartphones is the slimmest and fastest Nexus phone made till date, and comes with an advanced new lens that captures more light for brighter night and sharper action shots.

Here is an introductory video of the device