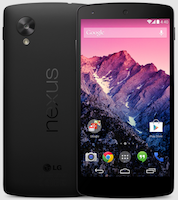 After putting up the 'coming soon' sign on Google Play earlier this month, search giant Google has finally launched the next Nexus smartphone in the Indian market. The device, built in partnership with LG, is called Nexus 5 and runs Android KitKat out of the box. In terms of pricing, the 16GB model is available for Rs 28,999, while the 32GB model has been priced at Rs 32,999.

Interestingly, while both the 16 and 32GB models of the device are available in white colour, the black colour models are currently out of stock. According to the company, the device is shipped within 1-2 days of receiving an order, and will be delivered anywhere between 2-7 days. Also, while the smartphone is displayed on a number of other e-commerce sites, its either sold out (Snapdeal.com), not available (Flipkart), or a forthcoming item (HomeShop18) as of now.

Google claims that the smartphone is the slimmest and fastest Nexus phone made till date, and comes with an advanced new lens that captures more light for brighter night and sharper action shots.