HTC launches over-priced One max for Rs 56,490 in India; not worth a buy 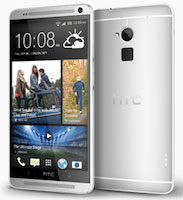 After announcing the same early last month, HTC has now launched the super-sized version of the original One handset in the Indian market. The new device, christened HTC One max, sports a 5.9 inch display, which is 1.2 inch larger than the 4.7 inch display of One, and has been priced at a whopping Rs 56,490. We looked around, and the cheapest deal on the phablet was still Rs 53,909 (which is a lot).

This one features a 5.9 inch full HD capacitive touchscreen display (1920Ã—1080 pixel resolution) with 373 pixels per inch density and runs on the latest Android 4.3 (Jelly Bean) operating system with HTC Sense 5.5 user interface. It is powered by a Qualcomm Snapdragon 600 1.7 GHz quad-core processor and has 2 GB RAM.

In terms of internal memory, users can choose between 16 and 32 GB models. The internal memory of the device can be further expanded an additional 64 GB with a microSD card. HTC is also providing 50 GB of additional free Google Drive online storage.

The phablet has a 4 megapixel HTC UltraPixel camera (with BSI sensor and) with LED flash that can record full high definition videos (1080p) at 30 frames per second. The camera includes an f/2.0 aperture lens and a sensor with UltraPixel that the company claims gathers 300 per cent more light than traditional smartphone camera sensors, providing good low-light performance. Plus, it has a 2 MP secondary front-facing camera that can record full HD videos as well.

On the connectivity front, the device has Infrared, Bluetooth 4.0, Wi-Fi, 3G and 4G (depending on the region). It also has a microUSB port and microSD card slot, a 3,300 mAh battery and comes with A-GPS support. HTC One Max measures 164.5mm x 82.5mm x 10.3mm and weighs 217 gm. The device has a zero-gap aluminium unibody, Stereo FM radio with RDS and Near Field Communication (NFC) and will be available in glacial silver colour.

Additional features include HTC BlinkFeed- a live stream of relevant information such as social updates, entertainment and lifestyle updates, news and photos on the home screen itself; HTC BoomSound- introduces front-facing stereo speakers with a dedicated amplifier; and HTC Zoe- brings special moments to life in three-second videos, enabling a range of advanced editing capabilities and creative flexibility. The company is also offering an optional HTC Power Flip Case, which comes with a 1,150 mAh battery expansion and offers both protection and extra juice when you need it most.

However, at almost Rs 54,000, we feel that HTC has got the pricing wrong yet again (it's a hat-trick now with the One series), especially since its competitors are available for as much as Rs 10,000 (or more) cheaper. In terms of competition, the phablet will compete with the likes of Samsung Galaxy Note 3, LG G2 and Sony Xperia Z Ultra that are available for Rs 45,961, Rs 44,990, and Rs 40,490 respectively. So skip the HTC One Max, and opt for one of these instead.