Moto G launched in exclusive partnership with Flipkart for Rs 12,499; should Micromax worry? 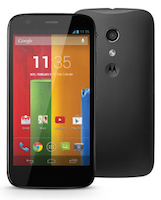 After a brief hiatus from the Indian market (the company had closed down its Indian website back in Nov 2012), Motorola Mobility is back with a bang. The company has launched its mid-priced Moto G smartphone in the market, and has tied up with leading Indian e-commerce player Flipkart for the same. As part of the partnership, the device will be available exclusively on Flipkart.com starting tomorrow (Feb 6, 2014).

To promote the device, Flipkart is also providing a number of offers to customers who will buy the device on the day of its launch. These will include Rs 500 off on eBooks, Rs 1,000 off on clothing, flat 70 per cent off on its covers, as well as a chance to get 100 per cent cash back (in the form of store credits) on the device.

Interestingly, the company has only launched the dual-SIM version of the smartphone, which has been priced at Rs 12,499 and Rs 13,999 for the 8 and 16 GB models. Here is a look at the specifications of the device.

The smartphone sports a 4.5 inch IPS LCD capacitive touchscreen display (720x1280 pixels resolution) with 326 ppi pixel density and is powered by a 1.2 GHz Qualcomm Snapdragon 400 quad-core processor. It runs on the Android 4.3 Jelly Bean operating system (upgradable to 4.4 KitKat), and has 1GB of RAM. It comes with 8 and 16GB of internal memory that is non-expandable.

Moto G comes with a 5MP autofocus rear camera with LED flash that can also record high definition videos (720p) at 30 frames per second, and a 1.3MP front facing camera for video calling. On the connectivity front, it has Bluetooth 4.0, Wi-Fi, 3G and a microUSB port. The dimensions of the device are 129.9mm x 65.9mm x 11.6mm and its weight is 143 gm. The company has provided a 2,070 mAh battery in the device, which also comes with GPS (with A-GPS support) and FM radio.

While both the companies mention that the device will be available exclusively on Flipkart.com, none of them have put a time frame to that exclusivity.

Yesterday, Snapdeal.com, a direct competitor to Flipkart had put up the device for pre-order on its website. The company was offering around 1,000 units, and according to it, the device was already sold out within two hours. The company has put the expected shipping date for Moto G as the third week of this month, which could very well mean that the so-called 'exclusive partnership' will actually last for only two weeks.

What's next for Motorola?

Motorola has been going through turbulent times off late. First Google acquired (in May 2012) the company for $12.5 billion, only to sell its handset division to the Lenovo Group for $2.91 billion. Whether the company's second coming in India can give it the much-required boost, only time will tell.

Also, in addition to Moto G, the company had launched its flagship smartphone called Moto X in mid last year. Sporting better specifications than its kid brother Moto G, and a slightly heftier price tag, the company had targeted the device on the 'personalised ownership want' of smartphone customers. While it was launched before Moto G, the company is yet to reveal an Indian launch date or price for the device, which makes us wonder if it is going to be launched in the country at all.