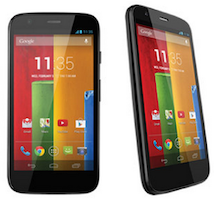 Last week, Indian e-commerce major Flipkart.com had exclusively launched the mid-priced Moto G smartphone in the Indian market. The device, which marked the return of Motorola Mobility in the country (the company had closed down its Indian website back in Nov 2012), has turned out to become a runaway success.

The bookings for the smartphone started on Feb 6, 2014, with the 8GB and 16GB models being available for Rs 12,499 and Rs 13,999 respectively. Within minutes of the launch in the morning, the 16GB model was sold out, while only a few units of the 8GB version were left. The company re-stocked the device around the afternoon, only to see it being sold out again. The rush was so much so that the site even went down for a couple of minutes on the day of the launch.

"We cannot comment on the exact numbers, but we sold thousands of units in a couple of hours. The high demand that we are witnessing for Moto G among Indian consumers has gone beyond our expectations. The traffic that we are seeing on our site post the launch has exceeded what we experienced during our Diwali sales. This is unprecedented," said Sachin Bansal, co-founder and CEO, Flipkart.

To put things in perspective, on Feb 6, 2014, the traffic on Flipkart.com was 2X of what it sees on regular days, and Moto G drove 67 per cent of this. The Moto G page by itself got 1 million page views and the company received close to 20,000 queries on Moto G alone during the day.

In addition, according to NDTV Gadgets, Flipkart had already sold around 20,000 units within hours of the launch. While the company is using its technology and supply-chain network to ensure that the Moto G phones are reaching its customers on time, it is also offering dedicated customer support teams that have been specially trained by Motorola.

Last we checked the site, the 16GB version of Moto G is still sold out, and the company is now offering reservations for the same. What this means is that you can 'reserve' a device, and it will be shipped to you between 10-20 days. However, the 8GB version is available for purchase as of now, with a delivery time of 2-3 days.

"Since the price difference between 8GB and 16GB is not much, it could have also led to people going for the 16GB one," said Bansal.

Post the success of the exclusive partnership, the company is now planning to do similar ones going forward as well. "We are always exploring associations with brands and sellers that can be beneficial to our customers. The Moto G launch is a first of its kind and we are sure it will set the precedence for more such initiatives in India," added Bansal. He further mentioned that both Motorola and Flipkart are seeking a long term relationship. 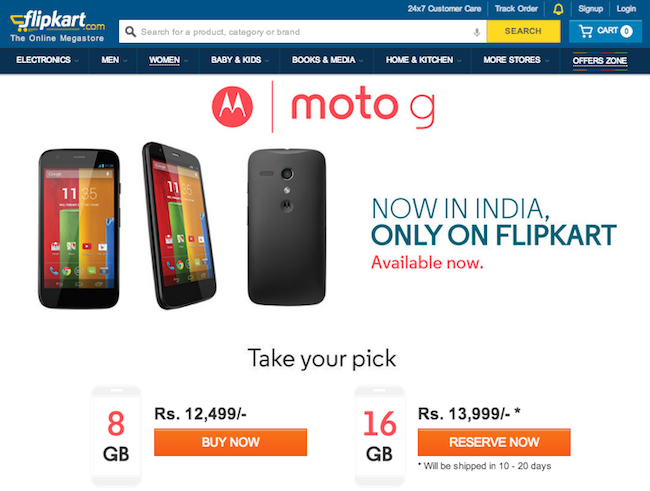 Note that in addition to Moto G, the company (Motorola Mobility) had also launched its flagship smartphone called Moto X in mid last year. Sporting better specifications than its kid brother Moto G, and a slightly heftier price tag, the company had targeted the device on the 'personalised ownership want' of smartphone customers. While it was launched before Moto G, the company is yet to reveal an Indian launch date or price for the device.

Considering the success of the current partnership, don't be surprised if you see another exclusive deal between the companies for Moto X next.

Note that while both the companies mention that the device will be available exclusively on Flipkart.com, none of them have put a time frame to that exclusivity.

Recently, Snapdeal.com, a direct competitor to Flipkart had also put up the device for pre-order on its website. The company was offering around 1,000 units, and according to it, the device was already sold out within two hours. The company has put the expected shipping date for Moto G as the third week of this month, raising a few eyebrows on the duration of the 'exclusive partnership'.

"We are the only platform for Moto G in this country. This exclusive partnership has proven to be a success and while we cannot comment on the duration, we are in it for the long term â€“ going into months, not weeks," clarified Bansal.

However, if that is the case, how is Snapdeal planning to fulfil the orders placed in the time frame it has claimed. We have contacted the company for more details on the same, and will update the story as and when we receive the same. What is your take on Flipkart's exclusive Moto G deal, do you think it was a one-time fluke, or an indication of things to come?