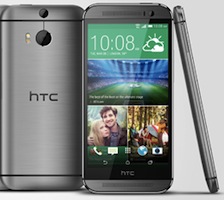 After a long series of rumours, speculations and leaks about the same, HTC has finally launched the successor to its flagship device HTC One. Christened HTC One (M8), the smartphone comes with a larger screen, 4G LTE support for India, and a host of other feature and specification changes. Here is a low-down on everything you need to know about the device, from its specifications, a comparison with its predecessor, to its tentative launch date for the country.

The smartphone features a 5 inch full HD Super LCD3 capacitive touchscreen display (1920Ã—1080 pixel resolution) with 441 pixels per inch pixel density and runs on the latest Android 4.4.2 (KitKat) operating system with HTC Sense. It is powered by a 2.3 GHz quad-core Qualcomm Snapdragon 801 processor and has 2 GB RAM. In terms of internal memory, users can choose between 16 and 32 GB models, which can be further expanded up to 128GB with a microSD card.

HTC One (M8) has a 4 megapixel HTC UltraPixel rear camera (has BSI sensor and an HTC ImageChip 2) with duo camera setup and dual-LED Flash. The rear camera can also record full high definition videos (1080p) at 30 frames per second and slow motion HD videos (720p) at 60 fps. Plus, it has a 5 MP secondary front-facing camera that can record full HD videos as well.

Why the Duo camera?

The Duo Camera boasts a depth sensor in addition to the main HTC UltraPixel module, capturing detailed depth information from a scene and enabling a range of effects that allow you to do more with your images. The advanced camera technology also works behind-the-scenes capturing images right from launch, so that when the shutter is activated, the sharpest possible image is instantly displayed. Also, when the flash is required, the LED Dual Flash automatically selects the exact colour tone and light intensity for more natural skin tones and a professional-looking shot.

On the connectivity front, the device has Infrared, Bluetooth 4.0, Wi-Fi, 3G, Near Field Communication (NFC) and 4G LTE. It also has a microUSB port and a microSD card slot. HTC has provided a 2,600 mAh battery in the device, which it claims will provide up to 20 hours of talk time and 496 hours of standby time on 3G. The dimensions of the device are 146.36 mm x 70.6 mm x 9.35 mm and its weight is 160 gm. It has GPS (with A-GPS support) and a stereo FM radio with RDS. It has a high quality metal unibody and will be available in gunmetal gray, glacial silver, and amber gold colours.

All-new HTC Sense 6: Has been completely redesigned with a cleaner, more striking visual style. Also comes with 'Motion Launch' feature, which is immediately able to detect the smartphones' position and movement, thanks to built-in motion sensors that allow you to interact with the phone without turning on the screen. A simple swipe will activate the device, Auto Answer allows you to answer a call by putting the phone to your ear without touching the screen, and a double tap turns the lock screen on and off.

HTC BoomSound gets bigger: Delivering sound that is 25 per cent louder than the HTC One (M7), without compromising quality, the new HTC One (M8) has dual frontal stereo speakers with a new amplifier, redesigned speaker chambers and a tailored audio profile.

The smartphone comes with HTC BlinkFeed, which is basically a live stream of relevant information such as social updates, entertainment and lifestyle updates, news and photos on the home screen itself. It aggregates the latest content in one place, without the need to jump between multiple apps. The device also comes with normal and extreme power saving modes, which when activated (either manually or automatically), delivers 60 hours of extra standby time at 20 per cent power, 30 hours at 10 per cent power and 15 hours at 5 per cent power.

In comparison, the original HTC One (M7) has a 4.7 inch full HD Super LCD3 capacitive touchscreen display (1920Ã—1080 pixel resolution) with 468 ppi pixel density. It is powered by a Qualcomm 1.7 GHz quad-core processor, has 2 GB RAM and in terms of internal memory, users can choose between 32 and 64 GB models.

The smartphone has a 4 megapixel HTC UltraPixel camera (with BSI sensor and an HTC ImageChip 2) with 'smart flash' that can record full high definition videos (1080p) at 30 frames per second, and a 2 MP front-facing camera that can also record full HD videos. On the connectivity front, the device has Infrared, Bluetooth 4.0, Wi-Fi, 3G and a microUSB port. It has a 2,300 mAh battery and comes with A-GPS support and NFC. HTC One measures 137.4mm x 68.2mm x 9.3mm and weighs 143 gm.

Here is an introductory video of the HTC One M8

While the original HTC One was launched in India last April for Rs 42,900, it is currently available for as low as Rs 38,700 on a number of e-commerce stores. Considering the specifications of its successor, we are expecting a close to Rs 50,000 pricing in India. According to HTC, the smartphone will hit Indian shores by the third week of April.