After launching its first smartphones running on Google Inc.'s Android operating system, Finnish-handset manufacturer Nokia has now unveiled three Lumia smartphones based on Windows Phone 8.1, as well as a series of exclusive Nokia features at Microsoft's Build 2014. The company also confirmed that Windows Phone 8.1 is scheduled to be available across the entire Lumia Windows Phone 8 portfolio as an over-the-air update this summer, following testing and partner approvals. 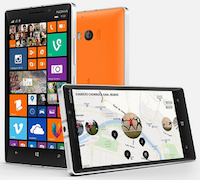 The smartphone has a 5 inch full HD AMOLED capacitive touchscreen display (1920x1080 pixel resolution) and runs on the Microsoft Windows Phone 8.1 operating system. It is powered by a 2.2 GHz Qualcomm Snapdragon 800 quad-core processor and has 2GB of RAM. The internal memory of the device is 32GB. While Nokia has not provided a microSD card slot for further memory expansion in the smartphone, it is providing 7GB of free SkyDrive storage with it.

Lumia 930 has a 20 mega pixel autofocus rear camera (has Carl Zeiss optics and optical image stabilisation) with dual-LED Flash that can record full HD videos (1080p) at 30 frames per second, as well as a 1.2 MP front facing camera that can also record HD videos (720p) at 30 fps. On the connectivity front, the device has Bluetooth 4.0, Wi-Fi, 3G, 4G LTE (depending on the region), and a microUSB port.

The dimensions of the device are 137 mm x 71 mm x 9.8 mm and its weight is 167 gm. The company has provided a 2,420 mAh battery with the device, which it claims will provide up to 11.5 hours of talk time and 432 hours of standby time. The smartphone has FM Radio, GPS (with A-GPS support), and comes with Near Field Communication (NFC). 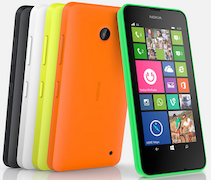 Both the smartphones have a 4.5 inch IPS LCD capacitive touchscreen display (480x854 pixel resolution) and run on the Microsoft Windows Phone 8.1 OS. They are powered by a 1.2 GHz Qualcomm Snapdragon 400 quad-core processor and have 512MB of RAM. The internal memory of both the devices are 8GB, which can be further expanded up to 128GB with a microSD card. Nokia is also providing 7GB of free SkyDrive storage with the smartphones.

The company has provided a 1,830 mAh battery in the devices, which it claims will provide up to 12 hours of talk time and 600 hours of standby time. The smartphones also have FM Radio, GPS (with A-GPS support), but no NFC. The devices will be available in five colours including bright orange, bright green, bright yellow, white, and black.

While both Lumia 630 and 635 are essentially the same device, the primary differentiating factor is the fact that while Lumia 630 is a 3G device, the Lumia 635 also comes with 4G LTE support. In addition, Nokia will launch two versions of the Lumia 630, a standard single-SIM version, as well as a dual-SIM version (a first for any Lumia device) targeted at growth markets like India and China.

Accompanying the Windows Phone 8.1 over-the-air update will also be enhancements to the camera roll and Creative Studio, as well as an improved Nokia Storyteller app, for sharing stories as a video slideshow on social networks.