In yet another Indian e-commerce casualty, Delhi-based e-shop for school and student supplies Allschoolstuff.com has shut shop. The startup was founded by Manoj Chandra, a senior retail professional who was last heading the marketing portfolio for Bata India and AnkurGarg, an IIT graduate with over a decade of experience in ecommerce technologies in 2011. It was targeting the fast growing market for educational supplies. The company operated its own warehouse and supply chain system and had also joined hands with logistics partners for deliveries.

If you happen to visit the site, you will be greeted with a message that reads:

"Over the past 3 years, AllSchoolStuff.com has been India's favourite online store for school and learning needs, focusing upon providing an exciting online destination for students, parents and schools to choose from a wide variety of branded, high quality products to meet all their educational supplies needs.

With over a million products sold, we have brought smiles to thousands of children across India. But all good things do come to an end and our journey ends now. Thank you to all our consumers, suppliers, employees, associates and investors who supported us during this brief but very exciting journey. Good Bye."

In 2012, the startup had raised a little less than $1 million in seed funding from Delhi-based Angels Investors Consortium (AIC) and some private investors. The company was looking to raise up to $5 million in its Series A funding for some time now, which never really materialised. The lack of funding must have resulted in the startup finally closing its operations.

Other casualties in the online space

A string of e-commerce startups shut down due to multiple reasons like staggering customer acquisition costs, cut throat competition and lack of fresh capital. While some of the newer players like Koolkart, Rock.in and MiraiStore caved in due to lack of funds, Delhi-based electronics e-tailer Timtara shut shop amidst controversy after the co-founder was arrested for allegedly cheating over 200 shoppers by taking payment and not delivering products.

In Feb this year, price comparison site BearShop.in had shut shop. Post BearShop, the company's founder Puneet Sharma co-founded another startup called BugClipper, which is basically a plug-and-play library designed to enhance apps. In a similar case, online toystore Wopshop shut down but the founders continued their entrepreneurial journey with another venture Pokkt. Another babycare focused etailer Hushbabies was shut by investors and top management who also asked the founder husband-wife duo to move out. 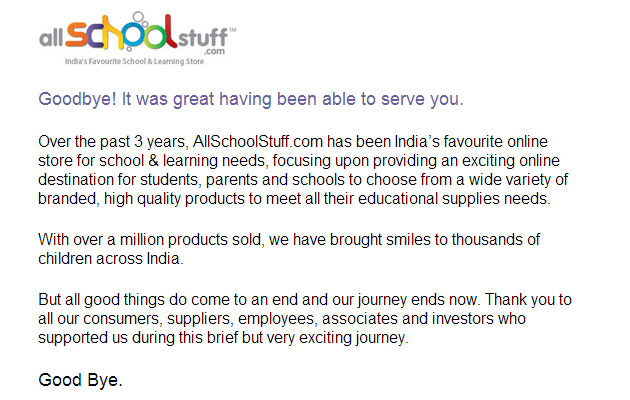 In another consolidation in the baby product vertical, Babyoye acquired Hoopos and later shut it down. One of the most talked-about shutdowns was Flipkart pulling the plug on its one-year old online digital music store Flyte citing infrastructure issues like micro-payments and piracy.

Two ventures that seemed to be in no-man's land include the oldest player in Indian e-com sector- Indiaplaza and Seventymm, which had previously pivoted from trying to become India's Netflix to an e-store. Other e-tailers which shut down in 2013 were Times Internet's NRI-focused Hutk.com, and handicraft e-tailer Apruv.com.