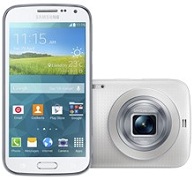 Samsung Electronics has unveiled yet another camera specialised smartphone. Christened Galaxy K zoom, the smartphone blends advanced digital camera technology with Samsung's Galaxy experience (at least that is what the company claims). According to the company, the new device will enable its users to create professional-quality visual content, with the help of a 20.7 megapixel rear camera.

As far as the specifications are concerned, the smartphone has a 4.8 inch HD Super AMOLED display (1280x720 pixels resolution) and runs on the Android 4.4 KitKat operating system. It is powered by a hexa-core (1.3GHz quad-core + 1.7GHz dual-core) processor and has 2GB of RAM. The internal memory of the device is 8GB, which can be further expanded up to 64GB with a microSD card.

Since it's a camera-specialised smartphone, the Galaxy K zoom offers an advanced technical camera system designed to offer the control and functionality of a professional camera. The Galaxy K zoom is equipped with new retracting lens technology that provides 10x optical zoom, as well as a 20.7MP BSI CMOS sensor for ultra-clear, ultra-detailed images. The autofocus rear camera also comes with Xenon Flash and can record full high definition videos (1080p) at 60 frames per second. In addition, it also has a 2MP front facing camera for video calling.

According to Samsung, the smartphones' camera excels in low light conditions, and provides Optical Image Stabilizer (OIS) to reduce blur caused by movement. Other features include Auto Focus/Auto Exposure Separation (AF/AE Separation) for the precise balance of light and clarity; next-generation 'Pro Suggest' mode which offers five optimised filter settings; 'Selfie Alarm' that allows users to take timed selfies with ease; and 'object tracing' for a clear, focused shot of a moving subject.

In terms of connectivity, it has Bluetooth 4.0, Wi-Fi, 3G and 4G LTE (depending on the region), as well as a microUSB port and a microSD card slot. The dimensions of the device are 137.5mm x 70.8mm x 16.6mm and its weight is 200gm. Samsung has provided a 2,430mAh battery in the device, which also comes with a full suite of Google apps. The smartphone has Near Field Communication (NFC), GPS (with A-GPS support), as well as an Ultra Power Saving Mode (for minimising the battery consumption), S Health Lite (for personalised fitness and lifestyle coaching), and a Studio app to allow users to easily edit their pictures and videos.

"The new Galaxy K zoom empowers users to capture and share their most important everyday moments in stunning clarity, with the convenience and connectedness of a Galaxy smartphone, for a unique, all-in-one mobile experience," said Sun Hong Lim, senior VP of mobile communications business at Samsung Electronics.

Details on its exact pricing and India launch date are not available as of now.

Prior to Galaxy K zoom, Samsung had launched Galaxy S4 Zoom (in June last year), which combined the Galaxy S4 smartphone with advanced photographic capabilities by providing a 16MP camera and 10x optical zoom in the device. The company has also been launching new versions of its Galaxy Camera, which was originally launched at the IFA 2012, at regular intervals. The latest one being launched in Jan this year.