For more details on the funding and investors click here.

We have contacted Yepme and will update the story as and when we hear from the firm.

"We are very excited about Yepme not only because of the business but also for the team it has assembled," said Ashish Gupta of Helion Venture Partners adding that the firm wants to go global along the lines of peers like Asos.com and Boohoo.com.

He did not confirm or deny the transaction but said the money is being deployed for building the brand and boosting growth.

Yepme claims to be India's first and now most searched online fashion brand (searched almost three-four times more than the next brand). It has signed on Bollywood actor, director and singer Farhan Akhtar to create a Yepme anthem with music from Ehsaan and Loy. The anthem will be released in early May.

Fashion e-tailing command higher margins than other verticals products and a business model created around private label has in-built opportunity to pump out more cash. However, Yepme just like Freecultr is far from hitting the break-even point.

According to experts, the online fashion space in India is at an inflection point and is on the path of huge growth. As per a recent report by venture capital firm Accel Partners, which has backed Myntra, women-influenced online sales in India will grow 5x in three years. 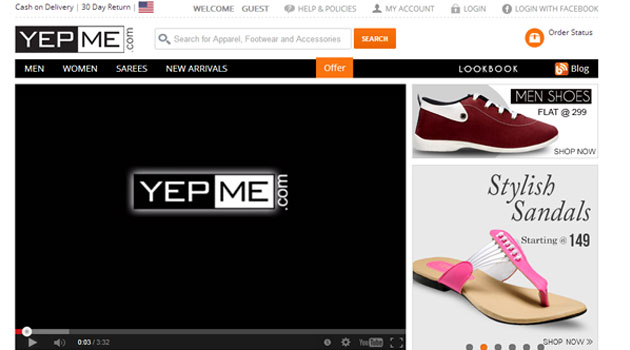 Apparel is also a space which is hotting up with Amazon adding it as a category in its Indian marketplace. Others are also beefing up resources with Snapdeal acquiring Doozton.com, a curated and socially-nurtured fashion shop that offers hand-picked fashion-finds and seeks to help people make better shopping decisions and discover fitting apparel.

Meanwhile, as first reported by Tehcircle.in last month, Myntra, which recently raised $50 million through fresh funding, is on track for a possible merger with the country's top e-commerce firm Flipkart, which is looking to enhance its fashion apparel category.

For Helion Venture Partners, this is the second bet on fashion e-tailing after Fashionara, which also sells products of other brands. However, in revenue terms Yepme is doing far better. The VC firm has also invested in various other e-commerce ventures in the past, including BabyOye, MakeMyTrip and Letsbuy (sold to Flipkart).