TaxiForSure gets $10M in Series B led by Bessemer

Bangalore-based Serendipity Infolabs Pvt Ltd, the company behind the online taxi booking platform TaxiForSure.com, has secured $10 million in a Series B round of funding, led by Bessemer Venture Partners. Existing investors Accel Partners, Helion Venture Partners and Blume Ventures also participated in the round.

TaxiForSure, which is currently operating only in Bangalore, Chennai and Delhi, will use the capital to expand its operations to 10 new cities, including Hyderabad, Ahmedabad, Pune, Mumbai, Indore, Bhopal, Baroda, Surat, Jaipur and Chandigarh, its co-founder and director Raghunandan G told Techcircle.in.

With this round, the total investment raised by the firm has reached $14 million.

TaxiForSure was founded by Raghunandan and Aprameya Radhakrishna, both engineering graduates from NITK Surathkal who got their management degrees from IIM Ahmedabad. Before starting TaxiForSure in June 2011, Radhakrishna worked as the head of business development for PDS at Jones Lang LaSalle, India. He had also worked with Infosys. Raghunandan earlier worked with Feedback Ventures as a consultant.

The startup acts as an aggregator of car/cab rentals and its offerings include local point-to-point pick-up and drop, airport transfer, local packages (for four or eight hours) and outstation packages. Besides regular rentals, it provides luxury cars like Rolls Royce Phantom, Hummer, Limousine, Jaguar, Audi A6, BMW 7 Series and Mercedes S class, among others.

According to Raghunandan, TaxiForSure is currently doing around 4,500 transactions per day. 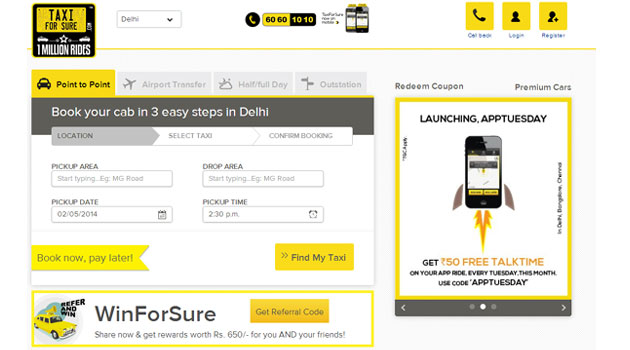 Last July, TaxiForSure.com had raised an undisclosed amount in its Series A funding from Accel Partners, Helion Venture Partners and Blume Ventures.

Avendus Capital was the financial advisor to this transactionâ€‹.

Online taxi booking is one of the fastest growing segments in India, and a number of domestic as well as global VC investors and PE firms have already poured millions of dollars into this space. Leading domestic players include Olacabs, Savaari, taxiGUIDE and Cabs24X7.

TaxiForSure is mainly competing with Olacabs, which secured $20 million its Series B funding from Matrix Partners and Tiger Global. It is also said to be close to raising another $30 million.