After rumours about the same doing the rounds for some time now, Huawei has finally unveiled its flagship smartphone called Ascend P7. A successor to the original Ascend P6, the device runs on the Android KitKat operating system and sports a slightly bigger 5 inch display (in comparison to P6's 4.7 inch screen). According to the company, at 6.5mm thickness, it is the slimmest smartphone in the world as of now. It will go on sale in 31 markets starting this month for $625 (Rs 37,490).

In addition, Chinese handset maker Oppo has further expanded its smartphone range in the country with the launch of Oppo Joy. The smartphone runs on the ColorOS, which is basically a customised Android operating system fully developed by the company. Targeted at the low-end segment of the smartphone market, the device is available for purchase for Rs 8,990 in India. 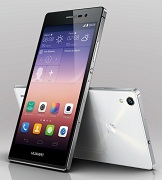 The smartphone sports a 5 inch FHD IPS LCD capacitive touchscreen display (1080x1920 pixels resolution) and runs on the Android 4.4.2 KitKat operating system with Huawei Emotion 2.3 user interface. It is powered by a 1.8GHz quad-core Hisilicon Kirin 910T processor and has 2GB of RAM. The internal memory of the device is 16GB, which can be further expanded up to 64GB with a microSD card.

Ascend P7 has a 13 megapixel autofocus rear camera with LED flash that can also record full high definition (1080p) videos at 30 frames per second, as well as an 8MP front facing camera for video calling. The camera has a BSI sensor, and its additional features include geo-tagging, touch focus, face & smile detection, and High Dynamic Range (HDR). On the connectivity front, the smartphone has Bluetooth 4.0, Wi-Fi, 3G, and 4G (depending on the region), as well as a microUSB port and a microSD card slot.

The dimensions of the device are 139.8mm x 68.8mm x 6.5mm and its weight is 124 grams. The company has provided a 2,500 mAh battery in the device, which it claims will provide up to 14 hours of talk time and 422 hours of standby time. It also has GPS (with A-GPS support), FM radio, and Near Field Communication (NFC). The smartphone will be available in black and white colours.

According to the company, Ascend P7 also comes with an Ultra Power Saving mode, which when activated, shuts down the functions that drain your battery the most, leaving calling and texting and giving you up to 24 hours standby on just a 10 per cent charge. 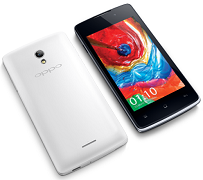 This one has a 4 inch WVGA capacitive touchscreen display (480x800 pixels resolution) and runs on the Android 4.2 Jelly Bean operating system. The display also has a nano surface coating, which the company claims will allow users to operate the smartphone even with wet hands or while wearing gloves (could come in handy in the winters).

It is powered by a 1.3GHz dual-core MediaTek processor and has 512MB of RAM. The internal memory of the device is 4GB that can be further expanded an additional 32GB with a microSD card. In addition, the company is also providing 5GB of free O-cloud storage (the company's cloud storage service) with the device.

Oppo Joy has a 3 megapixel rear camera that can also record videos, as well as a 0.3MP front facing camera for video calling. On the connectivity front, the smartphone has Bluetooth, Wi-Fi, 3G, as well as a microSD card slot and a microUSB port. The dimensions of the device are 124mm x 63mm x 9.9mm and its weight is 125 gm. Oppo has provided a 1,700mAh battery in the device, which also comes with dual-SIM capability.