After unveiling the same at the Mobile World Congress (MWC) 2014 earlier this year, Sony has now launched its flagship smartphone Xperia Z2 in the Indian market. Priced at Rs 49,990, the device will be available for purchase beginning next week.

Apart from Xperia Z2, which is a successor to the original Xperia Z1 smartphone, Sony had also unveiled the Xperia Z2 tablet, as well as a mid-priced smartphone called Xperia M2. While the company is yet to launch the tablet in India, Xperia M2 is available for purchase in the country for Rs 21,900.

The smartphone sports a 5.2 inch full high definition TRILUMINOS display (1920Ã—1080 pixel resolution) and runs on the Android 4.4 KitKat operating system. It is powered by a 2.3GHz Qualcomm MSM8974AB quad-core processor and has 3GB of RAM. The internal memory of the device is 16GB, which can be further expanded an additional 64GB with a microSD card.

It has a 20.7 megapixel rear camera with Exmor RS for mobile sensor that is capable of 4K Ultra HD recording as well as full HD (1080p) recording. In addition, there is a 2.2MP front facing camera that can also record full HD videos. Additional features of the camera include burst mode, HDR for both picture and film, 8x digital zoom, geotagging, smile shutter, and white balance, among others.

On the connectivity front, the device has Bluetooth 4.0, Wi-Fi, 3G and 4G LTE, as well as a microUSB port and a microSD card slot. It also comes with FM radio with RDS, GPS (with A-GPS support), and Near Field Communication. The dimensions of the device are 146.8mm x 73.3mm x 8.2mm and its weight is 158gm. Sony has provided a 3,000 mAh battery in the device that it claims will offer up to 110 hours of music listening, 400 hours of video playback and 880 hours of standby time. 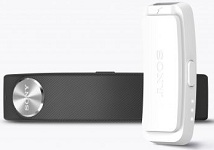 In addition to the Xperia Z2 smartphone, Sony has also launched its own smartwear device called 'SmartBand' in the country. According to the company, SmartBand's core module is a 24/7 wearable device that is fully waterproof despite its exposed microUSB port. It incorporates a removable core unit and a wrist strap. The core contains advanced sensor technology that feels your movements and sends the data to your smartphone. It's light, unobtrusive and the independent core means it can be carried or worn as you wish.

The life-logging wrist band lets you keep track of everything you do - your movements, your communications, as well as your entertainment. The device has been priced at Rs 5,990 in the country. However, as a limited time offer, Sony is providing the SmartBand free of cost if you purchase the Xperia Z2 smartphone.