After unveiling the same at the Mobile World Congress (MWC) 2014 earlier this year, Finnish-handset manufacturer Nokia has launched the Nokia XL in the Indian market. The device runs on the Nokia X software platform (a forked version of the Android OS) with a fresh, tile-based user interface inspired by its Lumia family. The device is priced at Rs 11,350.

Intex has also expanded its Aqua range of smartphones with the launch of Intex Aqua i5 HD. In comparison to Nokia XL, Intex's offering runs on the Android Jelly Bean operating system and is available for Rs 9,990. Here is a look at the specifications of the devices. 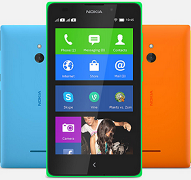 The smartphone sports a 5 inch IPS LCD capacitive touchscreen WVGA display (800Ã—480 pixel resolution) with 187ppi pixel density and run on a 1GHz dual core 8225 Qualcomm Snapdragon processor. It has 768MB of RAM, 4GB of internal memory and 32GB of expandable memory. The smartphone has a 5 megapixel auto focus camera with LED Flash that can also record videos, as well as a 2MP front facing camera for video calling.

On the connectivity front, the devices have Bluetooth 3.0, Wi-Fi, dual-SIM capability, as well as a microSD card slot and a microUSB port. The dimensions of the device are 141.4mm x 77.7mm x 10.9mm and its weight is 190 gm. Nokia has provided a 2,000 mAh battery in the device which it claims will provide up to 16 hours of talk time and 30 days of standby time.

It comes with Fastlane, a screen which lets people switch between their favourite apps more smoothly. People can also access curated, quality-tested apps from Nokia Store and other third-party app stores. The devices also come with HERE Maps, with true offline maps and integrated turn-by-turn navigation. Nokia XL will be available in bright green, orange, cyan, yellow, black and white.

Like the name already states, this one has a 5 inch HD touchscreen display (720x1280 pixels resolution) and runs on the Android 4.2.2 Jelly Bean operating system. It is powered by a 1.3GHz quad-core MediaTek MT6582 processor and has 1GB of RAM. The internal memory of the device is 4GB, which can be further expanded up to 32GB with a microSD card.

Intex Aqua i5 HD has a 13 megapixel rear camera with Flash that can also record videos, and a 5MP front-facing camera for video calling. On the connectivity front, the smartphone has Bluetooth, Wi-Fi, 3G, as well as a microUSB port and a microSD card slot. It has FM Radio, GPS (with A-GPS support) and Dual-SIM capability (GSM+WCDMA).

The dimensions of the device are 145mm x 72.1mm x 8.5mm and its weight is 149gm. Intex has provided a 2,000mAh battery in the device, which it claims will provide up to 5 hours of talk time and 180 hours of standby time. It is available in black and white colours.