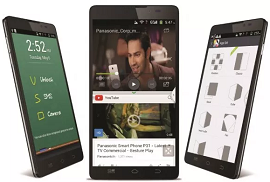 Panasonic has further expanded its 'P' series of smartphones with the launch of a new device in the Indian market. Christened P81, the smartphone is the first model in its series to be powered by an octa-core processor. The smartphone is available for purchase as of now and has been priced at Rs 18,990 in the country.

The smartphone sports a 5.5 inch HD capacitive touchscreen display (720x1280 pixel resolution) and runs on the Android 4.2 operating system (upgradable to Android 4.4 KitKat). It is powered by a 1.7 GHz octa-core MediaTek processor and has 1GB of RAM. The internal memory of the device is 8GB that can be further expanded up to 32GB with a microSD card.

Panasonic P81 has a 13 megapixel autofocus rear camera with LED Flash that can also record full high definition videos (1080p) at 30 frames per second, as well as a 2MP front facing camera for video calling. On the connectivity front, the device has Bluetooth, Wi-Fi, 3G, as well as a microUSB port and a microSD card slot. The company has provided a 2,500 mAh battery in the device, which also comes with dual-SIM capability (with dual standby). It has FM Radio and GPS (with A-GPS support), and is available in black colour.

The company has also added a number of new features in the user interface that include Gesture Play, dual-window operation, and Pop-i Player, among others.

"With the launch of the Panasonic P81, we have reached yet another milestone as this is the first model of the 'P' series that features an octa-core processor. The introduction of this model is a direct result of the consumers' needs, and customer centricity has to be at the core of developing products for the Indian consumer," said Manish Sharma, MD, Panasonic India.

In an attempt to woo customers, Panasonic is also offering a number of freebies with the smartphone that are together worth Rs 11,900 (at least that's what it claims). These include a number of preloaded apps (worth Rs 9,900) like a six month subscription to Evernote premium and free download from Hungama for a month, among others. It is also providing a flip cover and screen protector worth Rs 2,000 free of cost with the device.