With Bharatiya Janata Party (BJP) winning a landslide victory over its opposition Indian National Congress at the Lok Sabha Election 2014, the swearing-in ceremony of the new government is just days away. However, controversy has broken out over how the outgoing government has handled the existing Prime Minister's office's official account on micro-blogging site Twitter.

Instead of handing over the account to the incoming administration, the government renamed the old @PMOIndia account to @PMOIndiaArchive. The last tweet from the account was sent out on May 17, 2014 and it still continues to have 1.24 million followers. 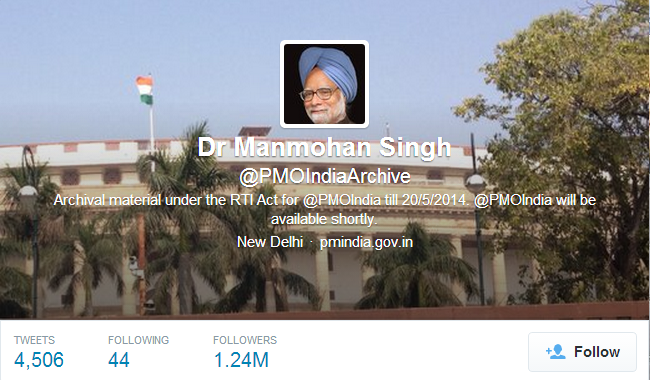 Pankaj Pachauri, former communications adviser to the PM, sent out a tweet explaining the action, which read, "All official communications from PMO in print and in digital form are being archived according to the RTI Act. Copyrights and control remain with the Prime Minister's office. These are PMO properties and the Prime Minister's office continues to manage them. The handover is being facilitated for the next administration. This is the first time such a handover is taking place."

Since then, Prime Minister's office has created a new official @PMOIndia Twitter account for prime ministerial candidate Narendra Modi, who is set to take oath as the next PM of India on May 26. As of now, there is scarce info available on the account (even a profile picture is missing) and it has a meagre 15,100 followers.

BJP has openly condemned the government's actions on Twitter, sending out a series of tweets that read, "Continuity in governance and all government assets is the hallmark of Indian constitution. @PMOIndia is a National digital asset. It is ungraceful, unethical and illegal in the way outgoing team in @PMOIndia has handled the transition of this National Digital asset."

However, all things said, does Modi even need the 1.24 million followers that seem to have been lost with the changes in the official handle. Considering he already has over three times the number of followers (4.25 million to be exact) in his personal Twitter handle. 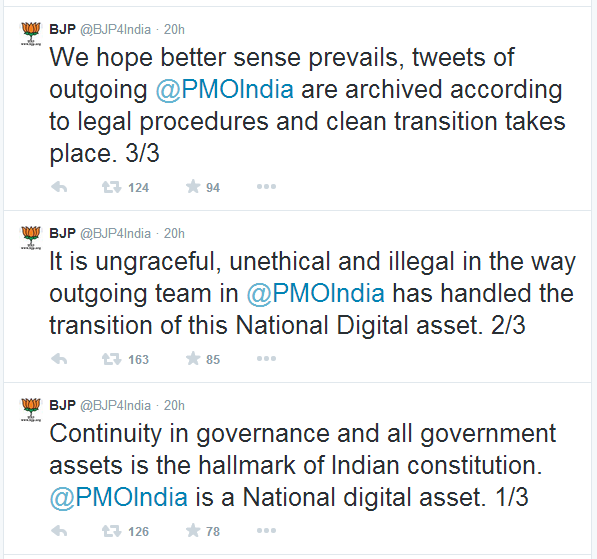 Recently, in the wake of BJP's win over Congress, Modi had sent out a victory tweet on the micro-blogging site. The tweet broke all previous Indian records and became the most retweeted (RTd) tweet ever from the country. Last we checked, the tweet had been RTd 70,163 times and already had 45,244 favourites.

The official Twitter India account also sent out a message confirming the same, which read "This Tweet from @narendramodi is now the most RTd Tweet ever from India." In addition to this, Modi posted a selfie of himself that showed him taking the blessings of his mother.

According to the company, this was the country's first Twitter election, since candidates, journalists and citizens alike used the Twitter platform extensively to discover elections content, converse with others in real time, and express their views. Candidates for office also used the platform to break (and unbreak) news, answer questions, post selfies, Vine campaign videos, and connect with their constituents.

The platform saw more than 56 million election-related Tweets from January 1 this year till May 12, when the polls ended. Each of the poll days saw between 5.4 lakh and 8.2 lakh election-related Tweets. To put this in perspective, in the 2009 elections, there was just a single active politician with 6,000 Twitter followers.