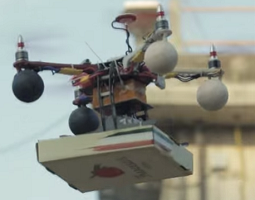 Taking a cue from e-commerce giant Amazon.com Inc., Mumbai's Francesco's Pizzeria also tested out pizza delivery using a four-rotor drone. For those who don't already know, drones are basically unmanned vehicles that fly through the air. As part of the experiment, the drone took off with the order from the company's South Mumbai outlet and delivered it to a high-rise building located 1.5 kilometres away.

According to the company, it is the first one in India to use a drone for making such a delivery in the country. In December last year, e-commerce giant Amazon.com Inc. had announced that it was testing delivery packages using drones. At the time, Amazon CEO Jeff Bezos had mentioned that the drones could deliver packages that weigh up to five pounds (2.3 kg), which basically represents roughly 86 per cent of packages that the company delivers. However, he added that the drones probably won't be put into use for four or five years.

Even before that, American restaurant chain and international franchise pizza delivery corporation Domino's Pizza had tested out pizza deliveries using a drone in the UK.

Here is a video of the entire delivery process right from the order being placed at the outlet to the delivery of the pizza via by the drone.

Note that this was only a test flight (looks more like a marketing gimmick) and actual drone deliveries won't happen for years to come.

"What we have done now will be common place in the next four-five years. At present, there are certain restrictions on the regulatory front like the drone is not allowed to fly above 400 feet altitude and is barred from flying over security establishments," Francesco's Pizzeria chief executive Mikhel Rajani told PTI.

Apart from that, there are also technical difficulties like a limited operating radius of 8 km after which the batteries go dry. Hence, any company that is seriously looking at the prospect would also need to build infrastructure like charging stations, etc. In addition, the fact that each such customised drone costs around $2,000 (around Rs 1.2 lakh)- as revealed by Rajani- means it is not a very economical proposition to begin with.

Then there is also the question of the limited carrying capacity of the drone, since a bigger pay-load would mean a bigger drone with more rotors, which in turn means higher costs (you get the idea where this is going).

And let's not even get into the security and privacy issue, since what's stopping people from attaching a camera to the drone and spying into other people's bedrooms. Finally, if/when the drones actually become operational, companies can also face resistance from labour bodies, because at the end of the day machines will be replacing regular people. As of now, such businesses primarily depend on delivery boys on two-wheelers for making deliveries.