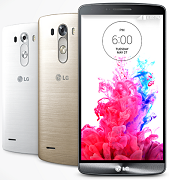 LG Electronics has finally taken the wraps off the successor to the company's flagship G2 smartphone. Christened G3, the device sports a 5.5 inch Quad HD display that the company claims provides four times the resolution of HD and almost two times higher resolution than a Full HD display. It has a floating arc form factor that incorporates the design heritage of the 'rear key' and has a polished metallic skin on the rear cover that is lightweight and fingerprint proof.

The smartphone sports a 5.5 inch Quad HD IPS capacitive touchscreen display (2560x1440 pixels resolution) with 538ppi pixel density. It runs on the latest Android 4.4.2 KitKat operating system and is powered by a 2.5GHz quad-core Qualcomm Snapdragon 801 processor. Users can select between 2 and 3GB of RAM. They will also get an option of choosing between 16 and 32GB of internal memory, which can be further expanded up to 128GB with a microSD card.

LG G3 has a 13 megapixel autofocus rear camera with dual LED Flash that can also record full high definition videos (1080p) at 60 frames per second, as well as a 2.1MP front facing camera that can also record full HD videos (1080p) at 30 fps. The Optical Image Stabilizer Plus (OIS+) camera also has 'Laser Auto Focus' which LG claims can shoot sharp images in a fraction of the time required by conventional phone cameras. On the connectivity front, it has Bluetooth, Wi-Fi, 3G and 4G LTE (depending on the region), as well as a microUSB port and microSD card slot.

The dimensions of the device are 146.3 x 74.6 x 8.9mm and its weight is 149 gm. The company has provided a removable 3,000 mAh battery in the device, which also has GPS (with A-GPS support), and Near Field Communication (NFC). It will be available in metallic black, silk white, shine gold, moon violet, and burgundy red colours. Starting today in South Korea, LG G3 will begin rolling out worldwide.

Smart Keyboard: According to LG, the Smart Keyboard reduces input errors by up to 75 percent by tracking and analysing typing habits and intuitively 'knowing' what word the user intends to type. The height of the keyboard can also be adjusted to better fit the user's hands and position of the thumbs. Individual keys can also be customised with frequently used symbols for even faster input.

Smart Notice: Like a personal assistant, Smart Notice provides suggestions and recommendations based on user behaviour, phone usage patterns and location. It can remind you of a call you declined earlier and ask if you would like to call that person back, or if you have a large number of unused files/apps on the G3, Smart Notice will ask if you would like to delete/uninstall them. Also, instead of simply displaying today's temperature and weather forecast, Smart Notice will make a recommendation such as, 'you may want to take an umbrella today since it will rain this evening.'

Here is a video introducing the device.

Knock Code: Enables users to unlock their device with a pattern of taps. Merging security and convenience, users can create a personalised code that can be entered anywhere on the screen.

Content Lock: Keeps personal files safe and hidden from view when sharing the G3 with friends. When the G3 is connected to a PC, Content Lock prevents file previews so the data is still safe.

Kill Switch: Gives G3 owners the ability to disable their phones remotely in the event of theft. The Kill Switch also allows content on the G3 to be wiped so personal information won't be compromised.

In addition, the company is also offering a number of accessories to accompany the LG G3, which includes a QuickCircle case that allows access to frequently used functions without opening the cover; a Bluetooth stereo headset (LG Tone Infinim) developed in collaboration with Harman/Kardon; as well as a wireless charger compatible with Qi's wireless power charging technology.

In comparison to G3, its predecessor has a 5.2-inch full HD IPS capacitive touchscreen display (1080Ã—1920 pixels resolution) with 423 ppi pixel density, and runs on the Android 4.2.2 (Jelly Bean) operating system. It is powered by a 2.26 GHz quad-core Qualcomm Snapdragon 800 processor and has 2GB of RAM. In terms of internal memory the users will have a choice between 16 and 32GB versions.

G2 has a 13 mega pixel autofocus rear camera with LED Flash that can record full high definition videos (1080p) at 60 frames per second and a 2.1 MP front-facing camera for video calls that can also record full HD videos at 30 fps. On the connectivity front, the device has, Bluetooth 4.0, Wi-Fi (with Wi-Fi Direct), 3G and 4G. It also comes with a micro USB port but has no microSD card slot. The device has a 3,000 mAh battery and comes with GPS (with A-GPS support), Infared and NFC. The smartphone measures 138.5mm x 70.9mm x 8.9mm and weighs 143 gm. It also has FM Radio with RDS.