While large online travel agencies (OTAs) like MakeMyTrip.com and Yatra.com are aggressively expanding their businesses and broadening the services offered by them, a 10-employee technology startup is quietly gearing up in an attempt to eat into their market share- with an auction site for flight tickets and other travel products.

Started just last month, 90bids.com follows a bid-to-win business model and has already partnered with a few startup travel agencies to offer their services complimentary, on a condition of promoting their business through its platform. According to the company, on 90bids.com, a user can get a flight ticket for as low as Rs 10 if he/she wins the bid.

"We want to offer various travel products in the most unique form to the consumers so that they enjoy not only the journey, but also the entire ticket-booking process," said Kunal Mittal, founder and CEO, 90bids.

To start bidding, you need to create an account with 90bids. Once signed-in, users will get 20 complementary tokens that are automatically credited into their account. You can start bidding with these tokens, and each token gives you the capability of bidding once (so 20 tokens equal 20 bids, and so on). If you happen to finish them off, additional tokens can also be bought, with each token costing Rs 10.

Each time you bid, the deal price will increase as per your bid and the tokens will be deducted from your account. Every time you use a token, your usage as well as the remaining number of tokens will be reflected on the screen.

"Unlike other deal sites, we don't have a fixed deal finishing time. Our deals end only when all the users stop bidding. Even if you bid in the last few seconds on the countdown timer, the deal will be extended by approximately ten seconds," said Mittal, a Delhi University alumnus who is also currently director of Frontier Lifeline Hospitals. 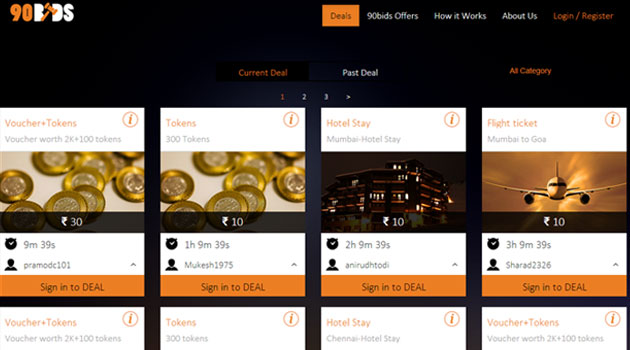 After the last bid is placed, the timer will start the count-down. Once the bidding is confirmed, three announcements will be made for a counter bid. If no bids are placed during this period, the deal will come to an end.

If you are the highest bidder when the deal ends, you will need to pay the final amount to get the particular deal/flight ticket/hotel reservation. The startup will update you (via e-mails and reminders) about the deal status, and you need to pay the amount within 30 days of winning the deal. If not paid, the deal will get forfeited.

"We auction premium flights & travel products and the winner of each auction receives the listed item at the final auction price. As a bid-to-win auction site, we collect a participation fee by way of the bidding tokens. The token purchases provide us with the funds to support our website and team, ensuring our low final auction prices are possible and sustainable," Mittal said.

Currently, an average of 8-10 auctions is taking place on the site on a daily basis. 90bids generates revenues from tokens purchases as well as the final auction amount received from the winners. A self-funded venture, 90bids is not looking to raise funding in the immediate future. "We are not actively looking to raise investment till we reach certain traction in terms of users and transactions," he concluded.