India sees over 186% growth in smartphone sales in Q1, is one of the fastest growing markets in APAC region: IDC

India was the highest growing smartphone market in the Asia-Pacific (APAC) region with a year-on-year (YoY) smartphone shipment growth of over 186 per cent in the first quarter of 2014. Vendors shipped a total of 17.59 million smartphones in Q1, 2014 compared to 6.14 million units in the same period of 2013.

The shipment contribution of 'phablets' (5.5-6.99 inch screen size devices) in the quarter was around five per cent of the overall market. The category grew by 125 per cent in the quarter in terms of sheer volume over Q4, 2013. The primary reason behind this trend was the launch of low-end phablets by international and local vendors alike.

The sub $200 category in smartphones contributed to about 78 per cent, hinting at the fact that the growth in the India smartphone market still remains constrained towards the low-end of the spectrum. A vast majority of the country's mobile phone user base migrated to smartphones from feature phones, as a result of which the Indian smartphone market outshone other emerging markets like China. In comparison to India, its neighbour China registered a year-on-year growth of 31 per cent during the same period.

The overall India mobile phone market stood at close to 61.07 million units in Q1, 2014 which is a 10 per cent quarter-on-quarter dip and a mere 1 per cent YoY growth. The dip in the overall mobile phone market shipments can be attributed to the 18 per cent decline in the feature phone shipments from Q4, 2013 to the first quarter of 2014, according to a report by International Data Corporation (IDC). 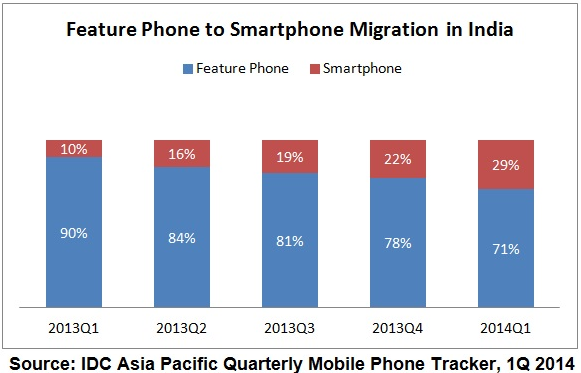 This was offset by the smartphone market, where units shipped grew by close to 17 per cent in Q1, 2014 compared to the previous quarter. The share of feature phones in the overall market further slipped further to 71 per cent in the first quarter, which is a considerable decrease from 90 per cent share in the year before quarter (see table above).

Interestingly, the smartphone penetration in India still hovers at just 10 per cent and is expected to grow due to a variety of factors including greater availability of low-cost devices and additional sales emphasis by top-flight vendors on less populous parts of the country. 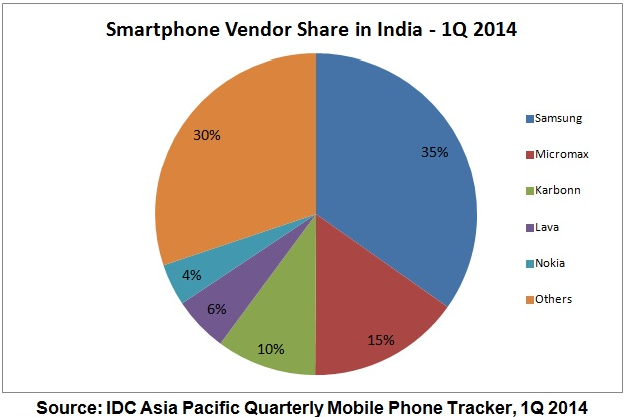 Samsung maintained its leadership position in the smartphone market with 35 per cent market share in the quarter. High volumes came in from the low-end devices like Galaxy Star Pro Dual SIM and Galaxy S Duos 2.

LAVA climbed up to the fourth position with close to six per cent market share, on account of new XOLO launches like A500S and A500 faring well in the market. Interestingly, Nokia also made its way back to the top five with four per cent market share. The Nokia X launch coupled with other low-end Lumia phones helped in improving the overall performance of the brand.

The migration from feature phones to smartphones will increase as cheaper variants of smartphones are launched in the market. Growth in the smartphone segment is expected to outshine the overall handset market growth in the foreseeable future. India smartphone shipments will reach 80.57 million units by the end of CY 2014. IDC expects that the Indian smartphone market will grow at a compound annual growth rate (CAGR) of about 40 per cent for the next five years.

"This rapid pace of growth in smartphones is expected to continue in India. While we notice that much of the growth is coming from low-cost devices using the Android operating system, Windows is making adequate gains too based on the strength of the entry level product mix in smartphones," said Kiran Kumar, research manager- client devices at IDC India.