Stayzilla claims 1,100 daily bookings on its marketplace, looking at profitability by October

Chennai-based Inasra Technologies Pvt Ltd, the company that owns and operates online accommodation marketplace Stayzilla.com claims that around 1,100 room nights are being booked on its platform on a daily basis. The Matrix Partners India-backed company is now looking to grow this number to 4,000-5,000 room nights per day by October this year.

"As of December last year, we were doing 750 room nights a day, and last month this number grew more than 68 per cent to 1,100 per day," said Yogendra Vasupal, co-founder and CEO of Stayzilla.

Vasupal claims that Stayzilla has been growing consistently over the past three-four years. "In FY 2011, we did around 1.3 crore in sales and then Rs 1.5 crore in FY 2012. This number grew to Rs 7 crore in FY 2013 and eventually to Rs 20 crore in FY14. In the last month alone, we clocked Rs 5 crore in sales," he said, claiming that the company is on its way to achieve Rs 100 crore in sales by the end of the current fiscal.

Started in 2005 as Inasra.com, the company was later rebranded to Stayzilla in 2010. Unlike popular OTAs like MakeMyTrip that offer both ticket booking and hotel reservation, Stayzilla focuses solely on room bookings. The company currently has over 13,000 properties across 950 cities listed on its portal.

It charges a transaction/commission fee from the accommodation providers. About 40 per cent of its traffic comes through mobile, and in terms of transactions, mobile contributes around 25 per cent. Vasupal says the firm has already achieved operational break-even in May 2013, and is now looking to become profitable by October this year. 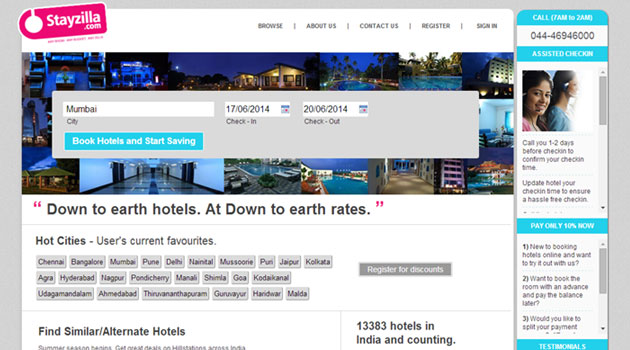 It will also start looking at acquisitions in this space after six months.

In October last year, Stayzilla had raised Series A funding from Matrix Partners India. While the company had not disclosed the quantum of funding at the time, Vasupal mentions that it was more than $5 million. Stayzilla had previously raised $0.5 million in angel funding from Indian Angel Network.

"We have just started deploying the capital raised from Matrix Partners. The proceedings from this round are being used to add more properties to our platform and also to acquire new customers," said Sachit Singhi, co-founder and director- partnerships at Stayzilla.

Stayzilla faces competition from OTAs such as Nasdaq-listed MakeMyTrip.com (MMT) and VCs-backed Yatra.com in this space. Stayzilla, however, claims that it is not directly competing with these companies, as hotels account for only 40 per cent of the total listing on its platform. Another player in this space is Oravel, which had recently launched a branded marketplace for budget rooms. This space also recently saw emergence of startups like Findmystay, a reverse bidding OTA that enables customers to book hotel rooms at the price of their choice.