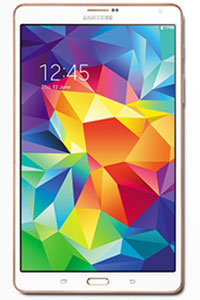 Samsung has further expanded its Galaxy range of tablet offerings with the introduction of not one but two new devices. Christened Galaxy Tab S, the tablets are available in 8.4 and 10.5 inch display screen sizes. According to the company, these are the thinnest and lightest tablets offered by it till date. Samsung has also provided a fingerprint scanner in the devices.

Both the tablets come with WQXGA Super AMOLED displays that the company claims provide deeper and more realistic images by making blacks darker and whites brighter. The tablet's 'adaptive display' also intelligently adjusts gamma, saturation, and sharpness based on the application being viewed, the colour temperature of the viewing environment and ambient lighting. In addition, the tablet's outdoor visibility technology makes on-screen content look bright, natural, and easy to view.

The tablet sports an 8.4 inch WQXGA Super AMOLED touchscreen display (2560Ã—1600 pixel resolution) and runs on the Android 4.4 KitKat operating system. It is powered by an Exynos 5 Octa (1.9GHz quad-core + 1.3 GHz quad-core) processor or 2.3 GHz Qualcomm Snapdragon 800 quad-core processor (depending on the region), and has 3GB of RAM. It comes with 16/32GB of internal memory that can be further expanded up to 128 GB with a microSD card.

Galaxy Tab S 8.4 has an 8 MP autofocus camera with LED Flash that can also record full high definition videos (1080p) at 30 frames per second, as well as a 2 MP front facing camera for video calling that can also record full HD videos. On the connectivity front, the device has Bluetooth 4.0, Wi-Fi (with Wi-Fi Direct), 3G & 4G LTE (depending on the region), as well as a microUSB port and a microSD card slot.

This one is identical to its kid brother in most respects, the only difference being the display, the battery and its overall size and weight. Like the name already states, it features a slightly bigger 10.5 inch WQXGA Super AMOLED touchscreen display (2560Ã—1600 pixel resolution). The dimensions of the tablet are 247.3mm x 177.3mm x 6.6 mm and its weight is 465 gm (Wi-Fi) / 467 gm (4G). Samsung has provided a 7,900 mAh battery in the device.

Additional features/offerings of the tablets include:

SideSync 3.0: Enables users to make and receive calls directly from their phone (with the call forwarding feature) to their Galaxy Tab S anywhere at home, no matter where their phone is kept.

Quick Connect: Galaxy Tab S quickly finds and connects to nearby devices for easy content sharing. The feature is available on both Wi-Fi and LTE versions of the tablet.

Multi User Mode: Enables users to create their own personal optimised profile that has safe and convenient access with a built-in 'fingerprint scanner'. The tablet also has an especially designed 'Kids' Mode' with its own dedicated interface and kid-friendly applications.

Galaxy Gifts: The company has also partnered with over 30 leading mobile content and service providers to offer its Galaxy Tab S users premium content and services that include access to over 15,000 Marvel comics through three months of unlimited free membership to Marvel's 'Marvel Unlimited' app; a free book every month on Kindle for Samsung through Samsung Book Deals; and free access to a range of movie and entertainment content on Google Play, among others.

The company is also offering a number of accessories with the tablets that include a 'Book Cover' that configures to three different display angles (viewing, touch and typing) to provide the most comfortable position to watch videos, read or type. Other accessories include a 'Simple Cover' for lightweight protection and a Bluetooth keyboard designed specifically for the Galaxy Tab S.