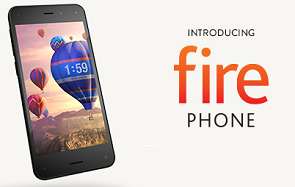 After rumours about the same doing the rounds for some time, world's largest e-commerce company Amazon.com Inc. has finally unveiled its first smartphone offering. Continuing its fascination with the word 'fire' (remember Kindle Fire, Kindle Fire HD and so on), the company has named the device simply that- Fire.

According to the company, Fire is the only smartphone with 'Dynamic Perspective' and 'Firefly', two new technologies that allow you to see and interact with your world through a whole new lens. It is powered by the latest version of Fire OS, which is basically a customised Android OS that comes with Amazon cloud services, built-in media libraries, productivity apps, and platform enhancements to integrate Amazon's digital content.

Dynamic Perspective: Uses a custom-designed sensor system that responds to the way you hold, view, and move your phone. It opens up a new class of immersive apps and games not possible on other smartphones (like peek to see detailed views of clothing, shoes, and more in the new Amazon Shopping app), as well as one-handed navigation and gestures like auto-scroll that enables users to read long web pages and books without ever touching the screen.

In addition, you can tilt, swivel, and peek to navigate menus and access shortcuts with one hand. Also, in carousel mode, you can scroll, scan, and take action without opening the app or leaving the carousel. Scan and delete emails, see your next appointment, find recent photos, access most visited web sites, and more, right from your home screen carousel.

Here is a video explaining the same.

Firefly: A new technology that quickly recognises printed web and email addresses, phone numbers, QR and bar codes, artwork, movies, music, and millions of products, making it easy to discover information, share items with friends, and more. Users can simply press and hold the Firefly button (a dedicated button has been provided for the same) to identify over 100 million items.

Mayday: Offers users free, live, on-device video support with an Amazon expert 24x7, 365 days a year at the touch of a button. It will be available over the AT&T cellular network, in addition to Wi-Fi.

"Fire is the only smartphone to put everything you love about Amazon in the palm of your hand— instant access to over 33 million songs, apps, games, movies, TV shows, audio books, magazines, and books, plus exclusive features like Mayday, ASAP, free unlimited photo storage in the cloud, and more," said Jeff Bezos, founder and CEO, Amazon.

The smartphone also comes pre-loaded with a suite of built-in tools and Android apps. For a limited time, the company is also offering 1,000 Amazon Coins (of $10 value) for apps, games, and in-app purchases.

The smartphone has a 4.7 inch HD LCD touchscreen display (1280x720 pixels resolution) with 315 ppi pixel density and runs on the Fire OS 3.5.0. It is powered by a 2.2GHz Snapdragon 800 quad-core processor (with Adreno 330 GPU) and has 2GB of RAM. Users will have the option of selecting between 32 and 64GB of internal memory, which is non-expandable. However, the company is providing free cloud storage for all Amazon content and photos taken with Fire smartphone.

It has a 13 megapixel auto focus rear camera with LED Flash that can record full high definition videos (1080p) at 30 frames per second as well as a 2.1 MP front facing camera for video calling that can also record full HD videos. Additional features of the camera include multi frame High Dynamic Range (HDR), optical image stabilisation, panorama and burst mode etc. On the connectivity front it has Bluetooth 3.0, Wi-Fi, 3G and 4G LTE (depending on the region), and a microUSB port.

The dimensions of the device are 139.2mm x 66.5mm x 8.9mm and its weight is 160 gm. Amazon has provided a 2,400 mAh battery in the device that it claims will provide up to 22 hours of talk time, 11 hours of video playback and up to 285 hours of standby time. The smartphones has GPS (with A-GPS support) and Near Field Communication (NFC). It also comes with dual stereo speakers with Dolby Digital Plus audio processing. 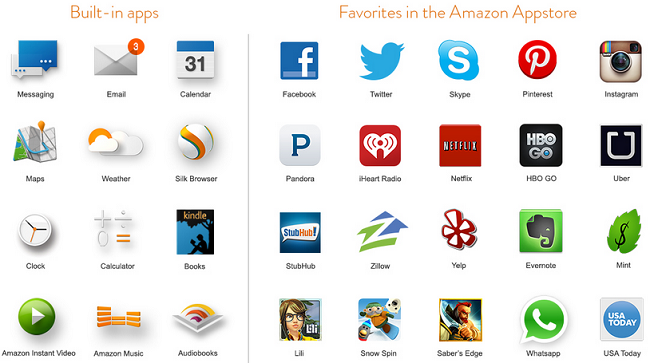 As a limited time offer, the company is also offering a full year of Amazon Prime membership with the Fire smartphone. If you already have Prime, Amazon will extend the membership for a full year. The company is also offering slim, form-fitting cases for the smartphone that are available in a variety of colours that include black or cayenne in premium leather, or black, cayenne, citron, blue, or royal in polyurethane.

Instead of directly taking on giants like Apple and Samsung, the Fire smartphone is more an extension of the Amazon family that focuses more on expanding the Amazon eco-system and enhancing the overall shopping experience of its existing users. Irrespective, in India, it will face competition from the likes of iPhone 5S (prices starting at Rs 45,899), Samsung Galaxy S5 (Rs 36,385) and Sony Xperia Z2 (Rs 48,990), among others.