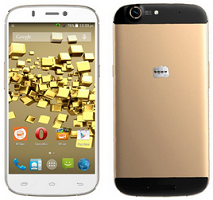 Within days of launching its first smartphone offerings running on the Windows Phone operating system, home grown handset and tablet manufacturer Micromax has launched its most expensive smartphone till date. Christened Canvas Gold A300, the device runs on the latest Android KitKat operating system and has a full-aluminium gold body (hence the name). The smartphone is available for purchase for Rs 24,000 on a number of e-commerce stores.

It is also the second octa core smartphone from Micromax, the first one being Canvas Knight A350 that was launched earlier this year for Rs 19,999.

The smartphone has a 5.5 inch TFT FHD touchscreen display (1920Ã—1080 pixels resolution) with 400 ppi pixel density and runs on the latest Android 4.4.2 KitKat operating system. It is powered by a 2 GHz MediaTek MTK 6592T Octa-core processor and has 2GB of RAM. The internal memory of the device is 32GB (25GB for mass storage and 1GB for apps) but further expansion is not available.

Canvas Gold has a 16 mega pixel autofocus rear camera with Flash (and Sony image sensor) that can also record full high definition videos (1080p) at 30 frames per second, as well as a 5MP autofocus front facing camera for video calling. Additional features of the camera include face beauty (retouch images on the move), live photo (record videos and click pictures at the same time), High Dynamic Range (HDR), auto gesture, and panorama, among others.

On the connectivity front, the device has Bluetooth 4.0, Wi-Fi, 3G and a microUSB port. The company has provided a 2,300 mAh battery with the device that it claims will provide up to 8 hours of battery life and 210 hours of standby time. While the exact specifications and weight of the device is not available as of now, it is 6.9mm in thickness. The smartphone has FM radio, GPS (with A-GPS support) and comes with dual-SIM capability. It is available in black/gold and white/gold colours.

Micromax has also pre-loaded a number of apps in the device that include KingsoftOffice, M! Live, Opera Mini, Swiftkey, Getit, M! Security, and Truecaller, among others.

While it is a decent device in terms of specifications (except the battery, which could have been bigger), we wonder if customers will actually pay close to Rs 25,000 for a Micromax device. After all, the company is synonymous for budget and mid-price range smartphones in the country. And it's one thing for Apple to charge over Rs 50,000 for simply painting a phone gold in colour, but we doubt if Micromax can get away with it.