Pune and San Francisco-based Helpshift Inc, a provider of CRM (customer relationship management) platform for mobile app publishers, has raised $10 million in its Series A round of funding led by Intel Capital, with participation from Silicon Valley-based early-stage investor Visionnaire Ventures besides existing investors True Ventures and Nexus Venture Partners.

This round brings the company's total capital raised so far to $13.2 million. Helpshift had previously raised $3.2 million in seed funding in October 2012.

As part of the deal, Susan Choe, managing partner of Visionnaire, will join the Helpshift board.

"We've seen good global adoption of our platform among all parts of the app ecosystem, from games to m-commerce, to lifestyle apps. We've realised we have something that most mobile companies could benefit from, and the only challenge for us has been the ability to scale to meet the explosive demand. This round of funding will enable us to attack each of these major mobile verticals and bring the benefits of Helpshift to thousands of app publishers," said Abinash Tripathy, co-founder and CEO, Helpshift.

Helpshift was founded by Tripathy and Baishampayan Ghose. An alumnus of American University, Tripathy had earlier also founded Infinitely Beta. In the past, he had worked at Yahoo, Openwave Systems and Oracle. Ghose had previously co-founded Paisa.com and oCricket.com. He holds a BE degree in Computer Science and Engineering from Shivaji University. 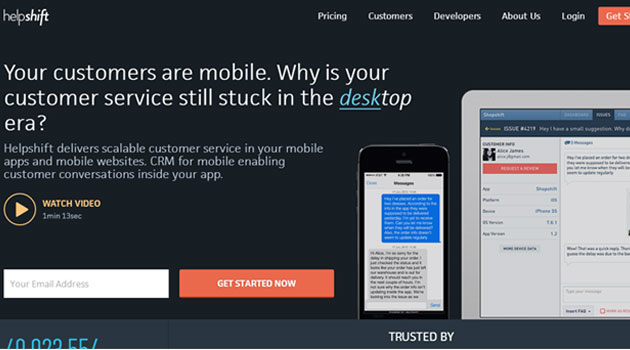 Helpshift is a CRM provider for companies building mobile apps and smart devices. It provides a native mobile SDK (software development kit) that can be integrated into any mobile app to enable two-way communications, helping companies talk to their customers directly inside their apps.

The firm claims that Helpshift has been installed on over 150 million devices worldwide and is used by companies such as Supercell, Glu Mobile, Flipboard and ModCloth.