Jabong eyes villages as market; how does it plan to tackle pain points

Rocket Internet-backed fashion and lifestyle e-commerce portal Jabong is eyeing villages of the country as the next potential market for its apparel and accessories and has started running a pilot project in parts of Punjab, Haryana and Uttar Pradesh trying to crack the challenges of the last mile delivery, poor infrastructure and internet penetration.

Although most e-commerce firms are seeing growing traction from non-urban areas, most of them essentially ship to small towns as against pure villages. Jabong's pilot straddles small towns and villages too.

"There is a huge opportunity and I don't think many have been able to crack it. FMCG players have been able to do it with their low-cost delivery network by being able to coordinate with the small shop owners in the villages, etc," Praveen Sinha, co-founder and managing director of Jabong, told Techcircle.in.

This is not the company's first pilot; it had conducted one a few months before as well. "We have initiated it again with some rethinking," says Sinha.

However, there are a string of pain points in expanding to the hinterland; so how is Jabong tackling these issues?

One of the main issues is access to the consumer. While computer penetration in rural consumers is low, a good chunk of consumers own mobile phones. However, the bulk of these are no-frill handsets which are not particularly suitable to see products online, let alone buy them. Even as declining price of smartphones would mitigate the problem going forward, it is an issue which affects any big expansion plans of e-tailers in the far-flung areas.

Jabong plans to provide select smart devices and internet connections to some families in particular villages to create a first experience of purchase.

"Free phones will be distributed to certain people, who will be taught how to operate and benefit from the phone. It's a concept similar to e-choupal where influencers in the area will use this app for educating and shopping to the local people," says Sinha.

Then comes the second big problem, logistics. To partly tackle the issue, instead of offering deliveries every day, the last mile delivery can happen once or twice a week depending on the demand.

"If there is no logistic infrastructure then we plan to create a hub where the delivery can happen periodically. Will that be acceptable by the population and will there be enough demand, is what our pilot projects are trying to decipher," he says.

In the meantime, the company has also started a self pick up model, something Amazon has been doing in the US.

Amazon, which itself borrowed the model from large offline retailers such as Walmart, has created technology backed lockers with its partners (typically convenience stores) from where consumers can pick the product they have ordered by punching in a code. While consumers, especially urban dwellers who find it difficult to get a product delivered during the office hours, can pick the product at their own convenience, Amazon saves on delivery costs, including costs of missed deliveries.

Jabong has a far simpler model for self pick-up and is driven by strategy to contain delivery costs.

"We leverage on the reach of grocery stores, petrol pumps and ATMS to serve customers in tier three areas not currently covered by any courier services. In this model, we drop our customers' orders in Jabong location points near to their house," Sinha said.

He added, "For us, it is a curve where we are just trying to understand what can be done." According to him, if logistics and internet penetration issues are solved, making people aware of such a concept is not a difficult task. 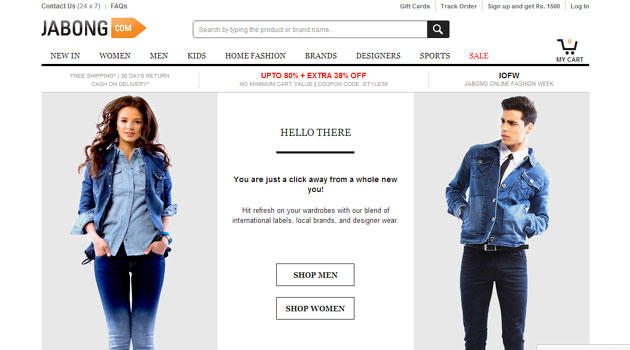 The company is currently pursuing an ambassador model in colleges in tier III and IV towns like Behror and Newai, wherein it is reaching out to the fashion conscious youth and through them a much wider audience.

Jabong also launched offline stores in areas central to a group of villages where people can understand and adopt e-shopping. These pilots were done in cities like Amritsar, Jalandhar and Patna to cater to small towns and villages including Patti and Bundala.

It says these met with success raising the local sales in that area by more than 15 per cent.

Meanwhile, the firm is also conceptualising an 'Awareness App' â€“ to educate villagers in various sectors such as health care, agri-weather information. This would be integrated with Jabong's shopping portal.

Talking about the buying appetite of the rural markets, Sinha said buyers there do not have any problem in spending on the right product.

"Even at an unorganised shop, the price point of a good pair of shoes will be Rs 400 to Rs 500. Here you can find those pair of shoes with an assurance of quality and free delivery at your place," he said.

"We will be selling all our Jabong products to the hinterland. I think they have equal aspirations and they will be given equal choices. So price point of shoes will be Rs 500 to Rs 15,000," Sinha said.

However, he pointed out that this will vary across different villages. For example, villages in Jharkhand, Haryana or Punjab cannot be mapped one to one. They will have a different set of requirements and buying philosophy and hence the strategy that can work for one of them may not work for all.

According to a joint report released early this year by industry body Internet & Mobile Association Of India (IAMAI) and research agency IMRB International, even as urban India continues to account for a large percentage of the mobile internet users across the country, the big growth is happening in the hinterland.

The report had projected that the number of users of mobile internet in rural India will reach 32 million by June 2014 or over a sixth of total mobile internet users in the country.

Tapping on to this fast growing segment is important for adding new users to the platform going forward for Jabong, whose key rival Myntra merged with the country's top e-tailer Flipkart recently.

Indeed, after announcing $1 billion funding last month Flipkart said that the company plans to build its supply chain in villages and towns.

Jabong also recently raised fresh money from Rocket Internet and UK's CDC. While the money would provide the means to expand across the country, it would need to think out of the box to crack the less explored hinterland.