The exact quantum of money it is looking to scoop up could not be immediately ascertained.

â€‹When contacted, Ver Se founder & CEO Virendra Gupta said, "...we do not comment on rumours or speculations." â€‹An e-mail sent â€‹to â€‹Shailendra Singh of Sequoia didn't elicit any response till the time of â€‹publishing the article.

â€‹NewsHunt (earlier Eterno Infotech) was launched in 2009 by former Nokia employees Umesh Kulkarni and Chandrashekhar Sohoni. The company was later acquired by Ver Se in 2012.

It was started as an application for feature phones and was later â€‹expanded to smartphones as well. The app is currently available on all leading mobile operating systems, including Android and iOS, among others. On Android alone, NewsHunt has registered 5-10 million downloads.

NewsHunt has partnered with more than 100 news publishers across the country to provide news stories in 12 languages that include Hindi, Tamil, Malayalam and Marathi, among others. It also provides news from Bangladesh and some African countries.

The firm claims that NewsHunt provides 1.5 billion news stories every month, and has catered to 50 million users since going live. 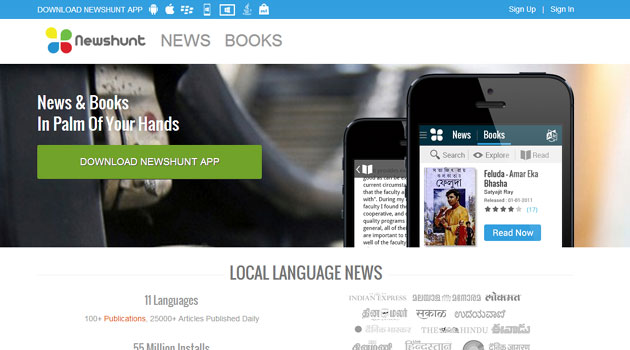 Last year, NewsHunt forayed into eBooks, and  is currently working with around 150 regional and global language book publishers. In this segment, it competes with Flipboard on a global level.

Other players operating in the news aggregation segment include NewsInShorts, which recently received an undisclosed amount in seed funding from Times Internet besides Flipkart founders Sachin and Binny Bansal. Then there is US-based BuzzFeed, which has just announced a $50 million fundraising from Andreessen Horowitz, a $4 billion California-based VC firm.

For Sequoia, one of the more active VC firms in the country, this would add up as another new portfolio firm having invested in close to half a dozen new firms since January 1 and has put in more money in an equal number of existing portfolio firms in the same period.

Sequoia Capital recently raised $530 million in its fourth India-focused fund to build on its venture and early growth investment activity in India. This new fund will invest in sectors like technology, consumer and healthcare.