Within a fortnight of launching the J Butterfly HTL23 smartphone in Japan, Taiwanese manufacturer of tablets and smartphones HTC is now bringing the device to a number of Asian markets including India, Taiwan, Hong Kong, Malaysia, Singapore, and Thailand. The device will be made available starting September 2, 2014, and will simply be called Butterfly 2 in the markets. Exact pricing details for India are not available as of now.

The smartphone runs on the Android operating system, and sports dual rear cameras. The duo camera boasts a depth sensor in addition to the main HTC 13MP camera, capturing detailed depth information from a scene and enabling a range of effects that allow you to do more with your images. UFocus enables users to alter the focus of their image after the photo has been taken, while 'Foregrounder' allows them to alter the background with effects to make the subject stand out. You can also give your shots a seasonal flavour using the 'Seasons' animations.

The smartphone sports a 5 inch full HD capacitive touchscreen display (1920x1080 pixels resolution) and runs on the Android 4.4.2 KitKat operating system (with HTC Sense 6). It is powered by a 2.5 GHz quad-core Qualcomm Snapdragon 801 processor and has 2GB of RAM. Users will have the option to choose between 16 and 32GB of internal memory, which can be further expanded up to 128GB with a microSD card.

Butterfly 2 comes equipped with a duo camera that features a 13 megapixel rear camera (has BSI sensor) with dual flash that can also record full HD videos (1080p) at 30 frames per second. In addition, it also has a 5MP front-facing camera for video calling that can also record full HD videos. On the connectivity front, the device has Bluetooth 4.0, Wi-Fi, 3G & 4G LTE, as well as a microSD slot and a microUSB port.

The smartphone measures 145.4mm x 70.2mm x 9.99 mm and its weight is 151 gm. HTC has provided a 2,700 mAh battery in the device, which it claims will provide close to 24 hours of talk time and up to 643 hours of standby time. Butterfly 2 comes with Near Field Communication (NFC) & GPS (with A-GPS support), and in terms of durability, it is both dustproof and water resistant.

The device also has dual frontal stereo speakers with a new amplifier, redesigned speaker chambers and a tailored audio profile. It will be available in red, white and indigo colours. 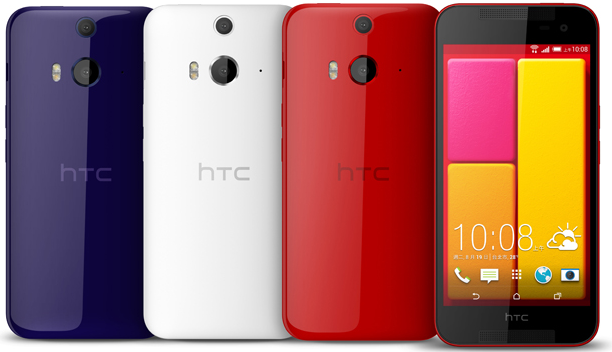 Zoe: A collaborative video editing tool, it enables users to create, share and remix highlight videos with their friends. Using Zoe's user interface, people can choose the photos and videos they'd like to share, add a theme and soundtrack, and then publish them.

HTC BlinkFeed: Is now more intuitive, with continuous scrolling for a fluid browsing experience, adaptable tiles and a new layout that presents articles in a clean, easy-to-read way.

Motion launch: Allows you to interact with the phone without turning on the screen. A simple swipe will activate the device, auto answer allows you to answer a call by putting the phone to your ear, and a double tap turns the lock screen on and off.