FreeCharge raises $33M in Series B from Sequoia, Sofina, ru-Net

Mumbai-based Accelyst Solutions Pvt Ltd, the company behind FreeCharge.in, an online platform for recharge, utility payments, promotions and couponing, has raised $33 million in its Series B round of funding from existing investor Sequoia Capital, with participations from Belgium-based investment company Sofina, besides Russian VC firm ru-Net.

The funds will be used to build a transactional advertising platform for India and emerging markets. The company has also added Gokul Rajaram, head (product) at Square; Koh Boon Hwee, founding partner of Credence Private Equity; and MuSigma founder Dhiraj Rajaram to its board of advisors.

For every recharge done on the site, FreeCharge gives customers discount coupons from various food joints and retailers, equivalent to the recharge amount which will be delivered to their mobile phones, e-mail or at their doorsteps. These coupons can be used to save money when they eat out, watch movies, book travel tickets, shop online, visit a salon, go gaming, and pick up books, music and groceries.

According to Goel, almost 70 per cent of FreeCharge's transactions come from mobile platforms, and the firm is growing more than 400 per cent year on year. The firm said that mobile transactions on its app have grown almost 30x since January 1 this year, and it has more than 10 million registered users. 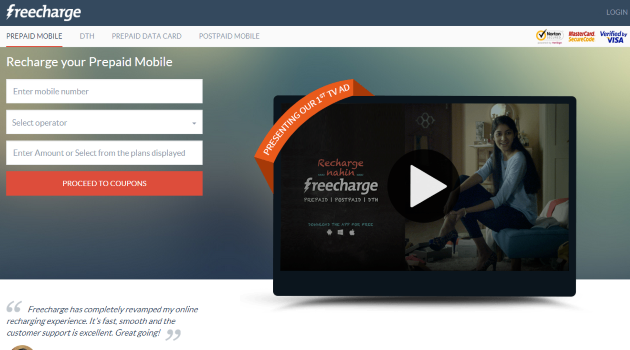 FreeCharge had earlier raised Rs 20 crore in Series A funding from Sequoia in January 2012.

"Freecharge is one of the most exciting companies in our Indian portfolio with a highly innovative business model that has global appeal and scalability. We are happy to participate in the new round to support the new initiatives the company has embarked upon. The team has done an awesome job to position FreeCharge among the leaders of the mobile recharge/payment and data analysis market in India and we believe the new round will help it grow even faster," said Galina Chifina, investment officer at ru-Net.

"The FreeCharge business model is absolutely a novelty. It has not been tried anywhere else in the world. The model builds on top of a massive telecom consumer base and can certainly be replicated by the FreeCharge team in various other countries and continents," Koh Boon Hwee.

Sofina is a Brussels Stock Exchange-listed company that invests both directly and through private equity funds. The company had earlier invested in Indian e-commerce major Flipkart.com.

ru-Net is a Russia-based VC investing globally in companies in the customer and technology space with a focus on e-commerce, marketplaces, platforms, SaaS and Big Data. Its other Indian portfolio firms include Freecultr, BeStylish and Snapdeal.com.