After unveiling the same in June this year, Nokia has now launched its X2 smartphone in the Indian market. Running on a forked version of Google's Android operating system, the device comes with both Nokia and Microsoft apps & services. The company has also added a 'home' button in the device, which enables users to directly reach the home screen (irrespective of the app they are currently in) with just a tap.

Targeted at the budget segment of the smartphone market, it has been priced as low as Rs 8,699. Microsoft had acquired Nokia's mobile handset business for $7.2 billion in September 2013.

In addition, home grown handset and tablet manufacturer Micromax has also further expanded its smartphone portfolio with the launch of Canvas Nitro A310. The device has been priced at Rs 12,990, and is available for purchase exclusively on Snapdeal.com. Interestingly, the company's announcement comes within days of Motorola launching its new Moto G smartphone, which is also available (exclusively on Flipkart.com) for a similar price of Rs 12,999.

Here is a quick look at the specifications of both the devices.

The smartphone sports a 5 inch HD IPS touchscreen display (1280x720 pixels resolution) with 294 ppi pixel density and runs on the Android 4.4.2 KitKat operating system. It is powered by a 1.7GHz octa-core MediaTek 6592 processor and has 2GB of RAM. The internal memory of the device is 8GB that can be further expanded up to 32GB with a microSD card.

Canvas Nitro A310 has a 13MP autofocus rear camera (with Sony IMX135 CMOS sensor) with Flash that can record full high definition videos (1080p) at 30 frames per second, and a 5MP front facing camera for video calling that can also record videos. On the connectivity front, the device comes with Bluetooth 4.0, Wi-Fi, and 3G, as well as a microUSB port and a microSD card slot.

Micromax has provided a 2,500 mAh battery in the device that it claims will provide up to 10 hours of talk time and 320 hours of standby time. It comes with FM radio, dual-SIM capability, and has GPS (with A-GPS support). It will be available in pristine white and mesmerising blue colours.

Additional features of the smartphone include:

Smart Gestures: Enables users to customise gestures as per their comfort right on the home screen. Use pinch in, pinch out and double finger swipes to instantly access your favourite apps.

Quick Look: Allows users to get feeds from their social media accounts, weather updates and latest news on a single screen. You can choose from a number of categories including art, automobiles, sports, business, and entertainment, etc.

Users can also receive missed call, message and mail notifications on the lock screen in a strip that matches the colour of the type of notification. Get a green strip for messages, red for email and blue for a missed call. Tap on the notification icon and navigate directly to the app from your lock screen. 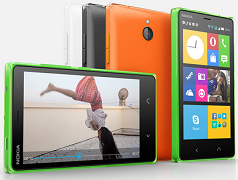 Nokia X2 sports a 4.3 inch ClearBlack LCD WVGA capacitive touchscreen display (800Ã—480 pixel resolution) with 217ppi pixel density. It is powered by a 1.2GHz dual core Qualcomm Snapdragon 200 processor and has 1GB of RAM. The internal memory of the device is 4GB that can be expanded up to 32GB with a microSD card. The company is also offering 7GB of free cloud storage with the smartphone.

The smartphone has a 5 megapixel auto-focus rear camera with LED Flash that can also record high definition videos (720p) at 30 frames per second, and a front facing VGA camera for video calling. On the connectivity front, the device has Bluetooth 4.0, Wi-Fi, 3G as well as a microSD card slot and a microUSB port.

The dimensions of the device are 121.7mm x 68.3mm x 11.1mm and its weight is 150 gm. Nokia has provided a 1,800 mAh battery in the device, which it claims will provide up to 13 hours of talk time and 23 days of standby time. The smartphone comes with dual-SIM capability (with dual standby), GPS (with A-GPS support) and has stereo FM radio with RDS. It will be available in white, black, orange and green colours.