Excl: GreenDust in talks with investors to raise over $100M

Delhi-based Reverse Logistics Company Pvt Ltd (RLC), which operates under the brand GreenDust, an e-commerce platform for refurbished goods, is in talks to raise over $100 million in its Series B round of funding, sources close to the development informed Techcircle.in. The company is in advanced talks with private equity hedge funds like Falcon Edge Capital LP for the same.

GreenDust, which has offices in the Middle East, will use the money to expand its footprints into various markets in Southeast Asia and Africa.

Early last month, Sandeep Murthy, partner at Lightbox Ventures, an investor in GreenDust, had mentioned that the company was in talks to raise its Series B round of funding. "GreenDust is looking for fresh investments, which will be used for expanding to overseas markets and adding more categories. We have started conversations with a variety of people, including large growth-stage PE and VC investors in India and overseas. We are also getting interests from various investors," he had said at the time.

In a separate chat with Techcircle.in at our Mobile Forum 2014, GreenDust's founder and CEO Hitendra Chaturvedi admitted that the company is looking for fresh investment, but added the firm has not made a final decision on the quantum of funding. "It is too early to disclose the details such as the names of the investors and the quantum of investment. However, our existing partners will participate in the fresh round," he noted.

The company has also claimed profitability with a monthly revenue run rate of close to Rs 100 crore. According to the company, it has more than doubled in revenue every year and has achieved profitability without sacrificing on growth within five years of its operations. It claims to have served over 2.5 million customers till date, out of which 50 per cent are repeat buyers.

"GreenDust provides 'wind beneath the wings' to the rapidly growing e-commerce ecosystem in India by solving the less sexy, often overlooked returns management problem. We will continue to innovate with many upcoming new offerings building on the strong reverse logistics infrastructure," said Chaturvedi. 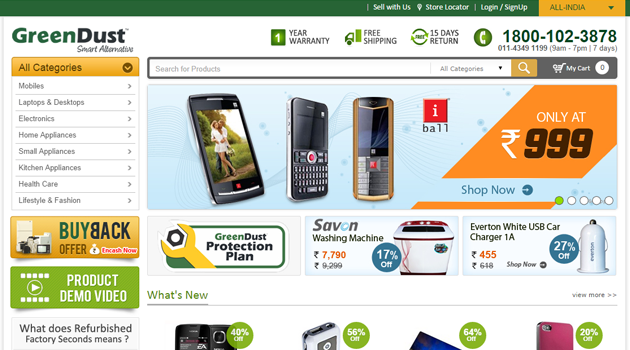 In comparison, most of the leading e-commerce players in the country like Flipkart and Snapdeal haven't claimed profitability, and are bleeding cash on a daily basis in order to scale up their businesses even further.

Established in 2009, GreenDust works with original equipment manufacturers (OEMs) to pick factory-rejected products and refurbishes them to sell online and also through its 250-plus franchise stores across India. The firm claims to have partnered with more than 40 brands for over a lakh products.

According to the CEO, a major chunk of the revenues comes from categories like consumer electronics, home appliances, IT and mobiles. GreenDust claims it is clocking Rs 100 crore in revenues on a monthly basis, and is eyeing $250 million in revenues by the end of the current fiscal year (FY14-15).

It is also looking to expand its product portfolio. "We are looking at categories such as apparels, shoes and medical equipment. In the medical devices segment, we will work with OEMs to pick their factory-rejected devices, refurbish and sell them to tier II and III hospitals," mentioned Chaturvedi, an IIT Roorkee alumnus who also holds an MBA from Southern Methodist University in the US.

Note: The original headline of the story was "GreenDust in talks with hedge funds like Falcon Edge to raise over $100M in Series B funding; claims profitability". This headline has been changed on October 1, 2014 to the current headline.