After unveiling the same last month, Apple has finally put a launch date against its latest iPhone models for India. Called iPhone 6 and iPhone 6 Plus, the devices will go up for pre-order starting tomorrow and will be available in the country from October 17, 2014.

Note that instead of a regular high-priced model and a cheaper version targeting the mid-price segment (like iPhone 5s and 5c); this time around the company has opted for a combination of a smartphone and a phablet. Both the devices sport bigger Retina HD displays, and feature a unibody enclosure of anodised aluminium. They are also the thinnest iPhone offerings by the company. 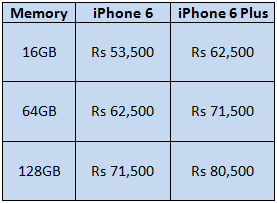 In India, the smartphone/phablet will be available from a network of Apple authorised resellers that include companies like Ingram Micro, Redington, Rashi Peripherals and Reliance. A number of e-commerce stores (like eBay) are also offering the new iPhones.

Processor & memory: Both the iPhones are powered by Apple's A8 chip with second generation 64-bit desktop-class architecture, which is supported by a M8 motion coprocessor. And with 'Metal'- a new graphics technology in iOS 8- developers can take performance of the A8 chip even further to bring console-class 3D games to the iPhone. In terms of internal memory, users will have a choice between 16, 64 and 128GB models.

iOS 8: Both models also include iOS 8, the latest version of Apple's mobile operating system. To improve one-hand functionality of the devices, Apple has shifted the power/wake button to the side of the new iPhones. Users can also simply double tap anywhere on the screen to slide it down, in order to improve the reach ability factor of the devices.

And if you feel paying upwards of Rs 60,000 (since 16GB is rarely enough memory) is absurd for a mobile phone- even if it has an 'I' in front of it- you can take our advice and opt for iPhone 5s or 5c instead. Even though the smartphones are just an year old, they are available for as low as Rs 31,500. You can read more about that here.