Taiwanese manufacturer of tablets and smartphones HTC has taken the wraps off a suite of imaging products that include RE, a small handheld camera; a selfie smartphone called Desire EYE; and HTC EYE Experience, an imaging software. Desire EYE comes with an unheard of 13MP front facing camera, which according to the company is one of the best front-facing shooters available in the market today. It runs on the Android operating system and sports a 5.2 inch display.

In addition, in an attempt to re-imagine the point-and-shoot category, the company has also introduced the RE handheld camera that will enable its users to take quick photographs and videos. Here is a look at the devices.

With a cylindrical design that looks more like a submarine periscope, RE has been made to fit in the user's hand. It features a built-in grip sensor that instantly activates the camera on pick up, eliminating the need for a power button. Its single shutter button allows one tap to capture photos and a longer press for video recording, so you don't miss the moment struggling between switching modes.

RE features a 16MP Sony CMOS sensor and is capable of full HD (1080p) video recording at 30 frames per second, slow motion HD (720p) recording, as well as time lapse recording. On the connectivity front, it has Bluetooth 4.0, Wi-Fi (with Wi-Fi Direct), a microUSB port and a microSD Card Slot (for memory expansion). The device is 26.5mm in diameter, 97.7mm in height, and its weight is 66.5 gm.

HTC has added an 820 mAh rechargeable battery in the camera that it claims will support up to two hours of continuous full HD video recording. A waterproof device, it is priced at $199 (Rs 12,196), and will be available in orange, blue, teal and white colours.

The handheld camera is supplemented with a RE mobile app- available on both Android and iOS platforms- that features a remote live viewfinder that will let users set up a shot and watch the live action on the screen of their mobile device, or switch to album and playback view to flick through the shots and videos already stored on the camera. The app will also back up everything to your mobile phone or the cloud automatically.

The software's face tracking feature keeps the user perfectly framed at all times for enhanced video chat and conference calls. Up to four people in the same room can be tracked, with each face cropped and positioned on the screen for maximum clarity. In addition, the option of screen sharing brings desktop functionality to smartphone-based video chat.

A 'Split Capture' function combines simultaneous photos and videos taken on the front and back cameras into one split-screen image or video, while 'Crop-Me-In' crops you from the image or video taken with the front-facing camera and positions it within the scene captured by the main camera. Voice Selfie enables users to trigger the shutter release with a simple command. While a picture can be clicked by 'say cheese' command, video recording can be triggered by saying 'action' or 'rolling'.

In addition, Face fusion allows you to merge your face with that of a friend or celebrity for an original look, and Live Makeup enables users to set the desired level of skin smoothing and preview the effect in real-time before the image is captured. 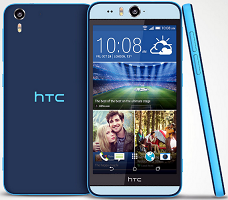 The smartphone has a 5.2 inch full HD capacitive touchscreen display (1920x1080 pixels resolution) and runs on the Android 4.4.2 KitKat OS (with HTC Sense 6 UI). It is powered by a 2.3 GHz Qualcomm Snapdragon 801 quad-core processor and has 2GB of RAM. The internal memory of the device is 16GB that can be further expanded up to 128GB with a microSD card.

Desire EYE sports a 13 megapixel autofocus rear camera (has BSI sensors) with dual LED Flash that can record full HD videos (1080p) at 30 fps. In addition, to entice selfie enthusiasts, the company is also offering a 13 MP autofocus front-facing camera with dual LED Flash in the smartphone. It also comes with a dedicated two-step camera key for focus and capture- providing comfortable access to shots, even one-handed.

The smartphone comes with Near Field Communication (NFC) and has GPS (with A-GPS support). It also has dual frontal stereo speakers with HTC BoomSound. Desire EYE has a waterproof unibody design and will be available in blue, white and red colours. While its India pricing is not available as of now, the device will be launched in the country later this month.