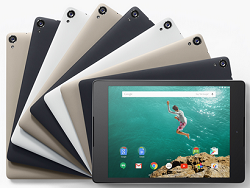 The company had also unveiled the Nexus 6 phablet (developed in partnership with Motorola), a Nexus Player, as well as the next iteration of the Android operating system called Android 5.0 or Android Lollipop.

Built in partnership with HTC, Nexus 9 has an 8.9 inch QXGA IPS LCD capacitive touchscreen display (2048Ã—1536 pixel resolution) with 281 ppi pixel density and runs on Android 5.0 Lollipop OS. It is powered by a 2.3GHz quad-core NVIDIA Tegra K1 processor and Kepler DX1 GPU. It comes with 2GB of RAM and will be available in 16 and 32GB of internal memory options.

The tablet has an 8MP auto-focus rear camera with LED flash that can record full HD videos (1080p) at 30 fps, and a 1.6MP front-facing camera for video calling. On the connectivity front, it has Bluetooth 4.1, Wi-Fi, 4G LTE, and comes with a microUSB port. It has GPS (with A-GPS support), Near Field Communication (NFC), and dual front-facing speakers with HTC BoomSound.

"And since more and more people want to have the same simple experience they have on their tablets when they have to do real work, we designed a keyboard folio that magnetically attaches to the Nexus 9, folds into two different angles and rests securely on your lap like a laptop," wrote Sundar Pichai, SVP, Android, Chrome and Apps at Google.

The company is also offering an origami cover for the tablet (sold separately) that is available in black, mint indigo, and lime stone colours. This one is priced at Rs 2,900. HTC had earlier worked with Google back in 2010 for the original Nexus One smartphone.