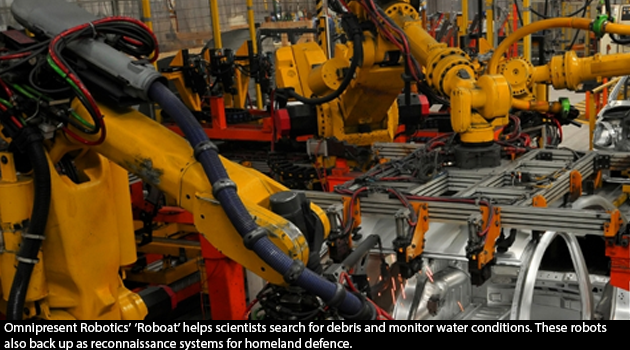 Robotics startups have been mushrooming over the last two years. Why? One may ask and be tempted to think that certain natural and man-made calamities forced the entrepreneurs behind these startups to enter a hitherto unexplored space. To name a few instances, there have been several floods and landslides in the entire Gangetic belt. Then there have been labour strikes that have affected several manufacturing companies like Bosch, Toyota and Maruti Suzuki. Finally the scientific world needs robots for experiments. Although there is no direct correlation to these events, these young startups in India were born out of the realisation that there are problems which can only be solved by robots.

Companies like Grey Orange Robotics, Gridbots Technologies, Omnipresent Robotics, Gade Autonomous Systems and Systemantics are trying to bring Isaac Asimov's 'Robot Butlers' to the rescue of Indians. Although only three companies have got business models going, others are making their robots learn faster, which means they will start functioning smartly in the next 18 months. Supporting these companies, although not directly, are the startups that want to proliferate robotics in schools. Edubotix, Robosoft Systems and ThinkLABS are setting up electronics labs in schools and trying to sell circuit boards for those who are interested. They hope that someday school kids can turn out to be robotics engineers.

"Product companies need to sustain in India. Is there a business model?" asks Alok Goyal, partner at Helion Ventures.

Some of these companies are, in fact, scouting for money after gaining visibility of late. Also keep in mind that Indian robots are six to eight times cheaper than the average robot that comes out of large MNCs like Siemens and Hitachi.