Hyderabad-based Wisdom IT Services India Pvt Ltd, which runs the online job search portal Wisdom Jobs is in talks to raise Rs 40 crore ($6.5 million) in its Series A round of funding from Gaja Capital and Helion Venture Partners, two people privy to the development told Techcircle.in.

When contacted, Ajay Kolla, co-founder and CEO of the two-year-old startup, confirmed the proposed fundraising, but declined to comment on the investors.

He added that while half of the funds will be utilised in marketing and brand activities, the rest will be used to increase the sales force and for expansion in tier I cities in the country.

The startup currently has employee strength of 280, and plans to increase this number to 480 by the next quarter.

In an emailed response, Gopal Jain of Gaja Capital declined to comment on the funding.

An email query sent to Helion Venture Partners did not elicit any response.

Wisdom Jobs currently claims to have 28 million users including 8 million exclusive members. The remaining users also have accounts on other job portals. For monetisation, the company offers corporate access to its data base in the form of monthly and yearly subscriptions. The subscription charges Rs 1 lakh per-year-per-login from companies.

It also offers other products such as 'E-university' and 'Pragnya Meter', which help students with skill tests and ratings in order to help them in landing the right job. These tests are free for students or job seekers. So far, the startup claims to have conducted tests for nine million students across 6,000 skill tests. 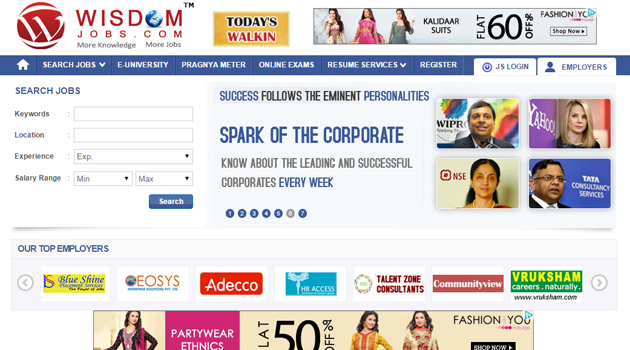 Currently, the company is present in Hyderabad, Bangalore and Chennai. Going forward, it plans to expand to Delhi-NCR, Mumbai, Pune, Kolkata and Ahmedabad.

It also operates websites for other international markets, including the US, the UK, Italy, Gulf, Canada, South Africa and countries in the Southeast Asia and Australia regions.

Recruitment business has been seeing investor interest despite large legacy players such as Naukri, Monster and Shine.

There was a string of deals last month alone, with Bangalore-based online recruitment platform TalentPad.com (formerly known as Talent Auction), which is run by Zobtree Ventures Private Limited, raising an undisclosed sum in its first round of institutional funding from Helion Venture Partners. Also Delhi-based referral recruitment portal MyRefers.com raised an undisclosed amount in its Series A round of funding from Noida-based Bedrock Venture Management Private Ltd.

Delhi-based GrownOut Solutions Pvt Ltd, which offers an online referral hiring platform that enables organisations to leverage their employees' professional network, also said it has secured an undisclosed amount in its first institutional round of funding from Matrix Partners India.