The business of horizontal e-commerce in India has clearly consolidated among the top three marketplaces: Flipkart, Snapdeal and Amazon, not necessarily in that order. All have raised or have commitments to $1 billion or more worth of investments fuelling their aggressive moves in the market.

While one part of the three-sided game is to rope in as many vendors on their site to increase product assortment and choice for attracting ever more consumers, the other is sheer size.

Techcircle.in looked at the basic revenues and losses of the firms running these three marketplaces. We focused on 2013-14 or the financial year ended March 31, 2014, the first year when all three had a marketplace running in India.

Notably, the firms running the marketplaces get revenues from listing fee and other services to the merchants who sell on the platforms. So the actual revenues of a marketplace is different and indeed a fraction of the value of products sold or gross merchandise value (GMV) on the respective websites. Virtually all of the three are now in revenue 'run rate' of $1 billion dollar plus (which means average monthly sales of over Rs 500 crore each, which spiked in October due to festival sales).

Losses arguably represent the customer acquisition costs, marketing and so on and so forth. 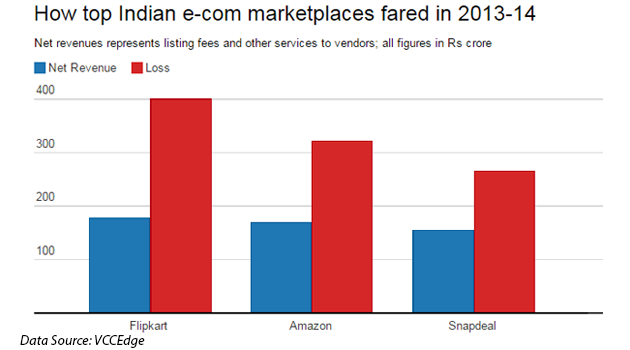 The data shows Flipkart is not just leading the GMV race but also tops the revenue generated from its vendors. On the flip side, however, it also losing more money than the others for every rupee earned. It is losing Rs 2.23 for every Re 1 in net revenues. In contrast, the other two are just under Rs 2 mark for every Re 1 in net revenue, with Snapdeal being the most frugal in comparison.

Here's another view of the three giants stacked together. 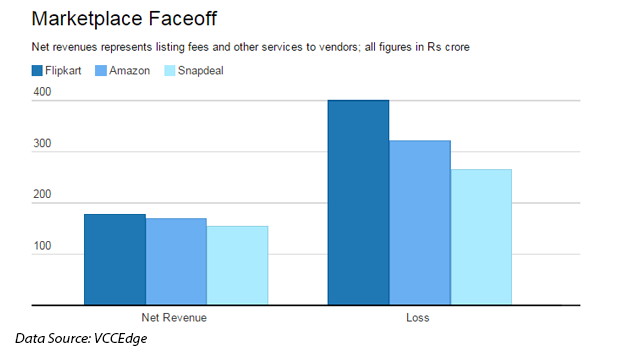