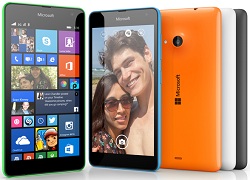 After rumours and teasers about the same doing the rounds for some time, Microsoft has officially launched its first smartphone sans the 'Nokia' logo. Christened Lumia 535, the device sports a Microsoft logo on the front and back, which was earlier home to the Nokia branding. Targeted at the budget price range segment of the market, the device sports a 5 inch display and runs on the Windows Phone 8.1 with Lumia Denim update out of the box.

Microsoft Corp had acquired Nokia's (once the undisputed leader in mobile phones) mobile phone business for $7.2 billion last year. And while the company had released a few Lumia models post the acquisition, all of them still came with the Nokia branding.

The smartphone sports a 5 inch IPS LCD qHD capacitive touchscreen display (960x540 pixel resolution) with 220 ppi pixel density and runs on the Windows Phone 8.1 with Lumia Denim operating system. It is powered by a 1.2 GHz Qualcomm Snapdragon 200 quad-core processor and has 1GB of RAM. The internal memory of the device is 8GB that can be further expanded up to 128GB with a microSD card.

The dimensions of the device are 140.2 mm x 72.4 mm x 8.8 mm and its weight is 146 gm. The company has provided a 1,905 mAh battery with the device, which it claims will provide up to 13 hours of talk time, 6.5 hours of video playback, and 552 hours of standby time. The smartphone has FM Radio and GPS (with A-GPS support). It will be available in orange, black, grey, green, white and blue colours.

Microsoft will be launching the smartphone in both single SIM (3G) and Dual SIM (3G) variants. The company will also provide 15GB of free OneDrive cloud storage with the device. Also, to add an extra layer of protection, a cover has been created specifically for the Lumia 535.

While an exact launch date and pricing for India is not available as of now, Lumia 535 single SIM and dual SIM will be available later this month for an estimated price of Rs 8,411 (â‚¬ 110) in China, Hong Kong and Bangladesh, with other countries to follow. The other low cost devices currently being offered by the company include Lumia 520 and Lumia 530 that are available for Rs 6,999 and Rs 5,900 respectively.