Micromax launches Cyanogen based 'Yureka' smartphone under its new sub-brand YU for Rs 8,999 in India 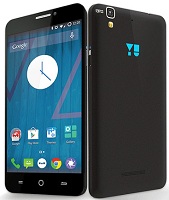 As expected, home grown handset and tablet manufacturer Micromax today launched the first smartphone under its new sub brand YU. Called Yureka, the device sports a 5.5 inch display and runs on Cyanogen OS 11. Based on the Android mobile platform, the OS is known for delivering a number of software advancements that optimise performance, customisation, security, and privacy features on mobile devices.

According to the company, the smartphone will get exclusive OTA firmware updates and support in India, and users will be able to root their devices, without voiding the warranty. Yureka has been priced at Rs 8,999 in the country and will be available for purchase exclusively on Amazon.in from the second week of January 2015. Registrations for the sale will begin on December 19 from 2pm onwards.

"The future is moving from an app driven experience to a services drive experience. We will work directly with developers' community and brands to build services right on the OS layer and offer a differentiated consumer experience. For YU, services will be the core focus which would be supported by hardware partners like Qualcomm to offer a customised experience through our devices and services," said Micromax co-founder Rahul Sharma.

Last month, Micromax had entered into a strategic partnership with Cyanogen Inc. to launch a new sub brand YU. The company has also set up YU Televentures, a wholly owned subsidiary of Micromax Informatics, to market the brand 'YU' through a 'direct-to-consumer' model.

Cyanogen is the company behind CyanogenMod, an open source operating system for smartphones and tablet computers, based on the Android mobile platform.

The smartphone sports a 5.5 inch HD IPS touchscreen display (1280Ã—720 pixels resolution) and runs on the Android 4.4 KitKat operating system. It is powered by a 64-bit 1.5GHz Qualcomm Snapdragon MSM 8939 octa-core processor and has 2GB of RAM. The internal memory of the device is 16GB (12.5GB available for apps and mass storage) that can be further expanded up to 32GB with a microSD card.

YU Yureka has a 13MP autofocus rear camera (with a Sony sensor) that can record full high definition videos (1080p) at 30 frames per second, and a 5MP front-facing camera for video calling. On the connectivity front, the device has Bluetooth 4.0, Wi-Fi, 3G and 4G LTE, as well as a microUSB port and a microSD card slot.

Micromax has provided a 2,500 mAh battery in the device which it claims will provide up to 8 hours of talk time and 210 hours of standby time. It comes with dual-SIM capability, FM Radio and GPS (with A-GPS support), and will be available in black colour.

Just yesterday, Micromax had secured a temporary injunction from the Delhi High Court against Chinese smartphone manufacturer OnePlus, which bans the company from marketing, selling and shipping its smartphones in the country. The company has been instructed to refrain from shipping any stock bearing the mark 'Cyanogen' in India. However, the court has allowed the company to clear its stock.

Micromax claimed that by selling its smartphones in the country, OnePlus would be infringing the exclusive rights Micromax had acquired by an 'ambient services and application distributions agreement' with US-based Cyanogen Inc. The company further claimed that it had 'incurred major expenses for creation of a brand exclusivity for providing to Indian customers mobile phones with Cyanogen operating systems' and 'it would suffer irreparable harm and loss if the defendants (OnePlus) are permitted to continue with their illegal acts in violation of the agreement between Micromax and Cyanogen'.

In response, OnePlus mentioned that Cyanogen had only informed it about the termination of their agreement a few weeks before its launch in the country. OnePlus had finally made its India debut with the launch of its flagship smartphone 'One' on December 2, 2014.