Within a month of launching its first smartphone sans the 'Nokia' logo, Microsoft has now introduced its cheapest 4G LTE device in the Indian market. Christened Lumia 638, the smartphone sports a 4.5 inch display and runs on the Windows Phone 8.1 operating system. It will be available for purchase exclusively on the company's brand store on Amazon.in for Rs 8,299.

As an introductory offer, Airtel post paid subscribers in Bangalore who purchase the device will get up to 5GB of free data on 4G for two months (available until March 31, 2015).

In addition, home grown handset and tablet manufacturer Micromax has further expanded its Canvas range of devices with the launch of a new tablet. This one is called Canvas Tab P470 and has been priced at Rs 6,999 in the country. Here is a look at the specifications of the devices. 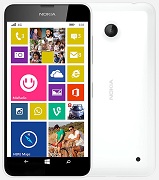 The smartphone sports a 4.5 inch IPS LCD FWVGA capacitive touchscreen display (854Ã—480 pixel resolution) with 221 ppi pixel density and runs on the Windows Phone 8.1 (with Lumia Cyan) operating system. It is powered by a 1.2 GHz Qualcomm Snapdragon 400 quad-core processor and has 1GB of RAM. The internal memory of the device is 8GB that can be further expanded up to 128GB with a microSD card. Microsoft is also providing 15GB of free cloud storage with the device.

Lumia 638 has a 5 MP autofocus rear camera that can record HD videos (720p) at 30 fps. However, the device does not have Flash or a front facing camera. On the connectivity front, the device has Bluetooth 4.0, Wi-Fi, 3G, and 4G LTE, as well as a microUSB port and a microSD card slot.

The dimensions of the device are 129.5 mm x 66.7 mm x 9.2 mm and its weight is 134 gm. The company has provided a 1,830 mAh battery with the device, which it claims will provide up to 7 hours of video playback, 9.4 hours of browsing (on Wi-Fi), and 480 hours of standby time. The smartphone has FM Radio and GPS (with A-GPS support). It is available in black and white colours. 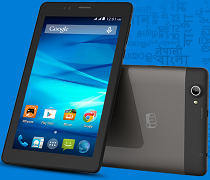 The tablet has a 7 inch TFT capacitive touchscreen display (1024Ã—600 pixels resolution) and runs on the Android 4.4.2 KitKat operating system. It is powered by a 1.3 GHz MTK 8312 dual-core processor and has 1GB of RAM. The internal memory of the device is 8GB (700MB for apps and 4.8GB for mass storage) that can be further expanded up to 32GB with a microSD card.

Canvas Tab P470 comes with a 5 megapixel fixed-focus rear camera with Flash that can also record HD videos (720p) and a 0.3MP front-facing camera for video calling. On the connectivity front, the device has Bluetooth, Wi-Fi, & 3G, as well as a microUSB port and a microSD card slot.

The exact dimensions of the tablet are not available as of now. Micromax has provided a 3,200 mAh battery in the device, which it claims will provide up to 11 hours of talk time, 6 hours of video playback, and 158 hours of standby time. It also comes with FM radio, dual-SIM connectivity, and GPS (with A-GPS support). Canvas Tab P470 is available in classy silver and mystic grey colours.

Micromax has pre-loaded a number of apps in the tablet that include Ask me, Amazon, BookMyShow, Hike, Opera, Truecaller, and M!Security, etc. The tablet also comes with support for 21 languages that include Hindi, Gujarati, Punjabi, Tamil, Telugu, Bodo, Nepali, Sanskrit, Konkani, Assamese, and Marathi, among others.