Bangalore-based Emvito technologies Pvt Ltd, which operates under the brand SpoonJoy, a subscription-based online platform that allows office goers and other consumers to order meal packs such as set cut-fruit packs, has received an undisclosed amount in funding from Flipkart co-founder and CEO Sachin Bansal and chief product officer Mekin Maheshwari. Sahil Barua, co-founder of Delhivery, and Abhishek Goyal, founder of Tracxn, also participated in the round.

The funds will be used to expand operations in the city, in addition to growing the customer-base, SpoonJoy's co-founder Prateek Agrawal said. The startup is also planning to launch an iOS app in the next two-three months.

SpoonJoy was launched in April last year by Manish Jethani, former AVP (catalogue) at FashionandYou.com. In the past, he had also worked at companies including UrbanTouch.com, Chakpak.com (whose catalogue was acquired by Flipkart) and TransBit Technologies. Jethani later roped in his IIT Roorkee batchmates Sourabh Agarwal, Prateek Agrawal and Kanishk Tyagi as co-founders. 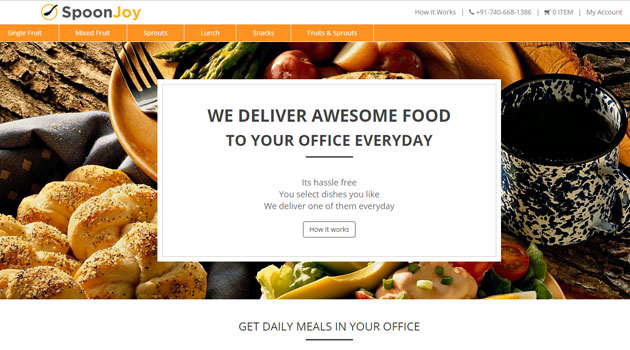 SpoonJoy.com is a subscription service to get meals at customers' doorsteps. Users can sign in and select food of their choice from the number of items listed on the site, including fruits, sprouts, lunch packs and snacks. Once an item is picked, the user can enter his/her area code in the corresponding column. The startup will then deliver the items at the customers' doorsteps.

"Unlike online food aggregators such as Foodpanda and JustEat, we are in charge of the food items we deliver," said Prateek. "We take care of everything from deciding the menu, taking the orders, food preparation, packaging & delivery. Here we are optimising the supply chain of food in order to make high-quality food affordable."

SpoonJoy claims that it receives 350-400 orders a day, of which almost 90 per cent come from offices, while the remaining from homes.