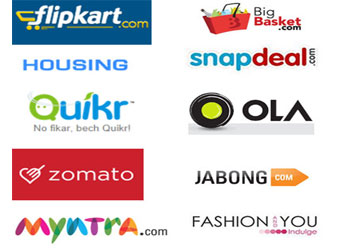 Year 2014 was literally a billion dollar year for the e-commerce, internet and mobile sectors sector in India. Capital poured in not just once or twice but almost thrice or even more in few companies such as home-grown e-com giants Flipkart and Snapdeal.

Those coming in with the moneybags included not just conventional venture capital and PE firms but also hedge funds, sovereign funds and even business tycoons such as former Tata Group chairman Ratan Tata.

Here's a look at the top fund-raising in the e-commerce and consumer internet space:

Flipkart raised over $1.9B in three rounds

Flipkart.com, India's largest e-commerce platform, raised a $1.91 billion in three rounds through the year. At first, the e-com firm raised $210 million led by DST Global, a global investment firm focusing on internet, in May. Existing investors Tiger Global, Naspers, and Iconiq Capital also participated in this round. After a couple of months, the firm raised a record $1 billion in a fresh funding round co-led by two of its existing investors Tiger Global and Naspers. Singapore's sovereign fund GIC, along with other existing investors Accel Partners, DST Global, ICONIQ Capital, Morgan Stanley Investment Management and Sofina, also participated in this financing round. It ended the year with a bang raising $700 million more from a slew of investors, including UK-based investment management firm Baillie Gifford, US-based VC fund Greenoaks Capital, Steadview Capital, T Rowe Price Associates, and Qatar Investment Authority. The round also saw participation from existing investors DST Global, GIC, Iconiq Capital, and Tiger Global. Flipkart had sealed one large deal snapping Myntra and with all the money it has garnered it is poised to strike more acquisitions in the coming year, as it takes on the might of Amazon and also fights local rival Snapdeal.

Snapdeal raised close to $1B in multiple rounds

Snapdeal became the second Indian internet firm to cross funding milestone of raising around $1 billion or more throughout the year. In the latest and largest round it raised $627 million from Japanese telecom and internet firm SoftBank Corp besides existing investors Kalaari Capital and Nexus Venture Partners pitching in with around $65 million more. This was the second biggest fundraising round by an Indian e-com firm, after Flipkart's record $1 billion funding round early this year. Post this, SoftBank became the majority stake holder in Snapdeal. The e-com firm raised $134 million in previous round led by existing investor eBay Inc and participation of other existing backers like Kalaari Capital, Nexus Venture Partners and Bessemer Venture Partners. Intel Capital and Saama Capital also participated in this round. It also raised $100 million from US-based BlackRock Financial Management, Singapore's state investment firm Temasek, Hong Kong-based Myriad Asset Management and Tybourne Capital Management, besides PremjiInvest, the personal investment vehicle of Wipro chairman Azim Premji. It also raised small sum from Ratan Tata, former chief of Tata Group.

Mumbai-based ANI Technologies Pvt Ltd, the company behind Olacabs, an online marketplace for cabs and car rental services raised $250 million in two different rounds of funding during the calendar year 2014. It entered into an agreement to raise $210 million in its Series D round of funding from SoftBank Corp., with participation from existing investors Tiger Global and Matrix Partners India, besides Steadview Capital. Before this, it raised $41.8 million in its Series C round of funding led by Hong Kong-based equity hedge fund Steadview Capital and Silicon Valley-based Sequoia Capital. Existing investors Matrix Partners India and Tiger Global Management also participated in this round. The latest funding from SoftBank among others has put in enough money power with the firm to chart out and continue on its path after breaking out of the pack of the online cab aggregators. Its peers such as TaxiForSure and others also raised additional capital but Ola is now well ahead of most or possibly all of them.

Quikr Mauritius Holding Pvt Ltd, the parent company of Quikr India Pvt Ltd which runs online classifieds site Quikr.com, secured $150 million in two rounds of funding during 2014. The company raised $60 million in a round led by Tiger Global Management. The round also saw participations from its existing investors, including Matrix Partners India, Nokia Growth Partners, Norwest Venture Partners, Omidyar Network, Warburg Pincus and eBay Inc, besides Swedish investment firm Investment AB Kinnevik. This transaction valued it around $340 million and its total funding to date rose to around $200 million. Early this year it had raised $90 million led by Kinnevik. Quikr competes with OLX among others in India.

Real estate listing portal Housing.com, owned and operated by Mumbai-based Locon Solutions Pvt Ltd, secured $109 million in two rounds of funding. It raised $90 million in  a round led by telecom and internet giant SoftBank Corp., with participation from New York-based hedge fund Falcon Edge Capital and existing investors. SoftBank invested the capital through SoftBank Internet and Media, Inc (SIMI), the vehicle which recently also backed Snapdeal and Olacabs. Housing.com had previously raised approximately $18 million in another round led by Helion Venture Partners among other investors early this year. It is another new generation venture which is breaking out of the pack and is among the top players in its vertical.

Online fashion retailer Jabong raised equity funding of around $100 million, of which it received $27.5 million from UK's development finance institution CDC. The funding saw CDC one of the oldest and largest DFIs globally, pick up an undisclosed stake in the Gurgaon-based venture, which is incubated by Germany's Rocket Internet. This came ahead of the decision of its key investors to bring it under a global umbrella Global Fashion Group through a merger. Even the global merger is on, it is learnt to be in talks for a possible deal where Amazon may buy Jabong.

Gurgaon-based Zomato Media Pvt Ltd, which owns the popular restaurant and event-listing site Zomato.com, raised $60 million (Rs 370 crore) in a Series E funding round led jointly by Info Edge (India) Limited and Vy Capital, with participation from Sequoia Capital. The transaction also included purchase of shares from certain existing shareholders. The transaction valued Zomato at a pre-money valuation of $600 million which translated into post-money valuation of $660 million. Info Edge said it would be picking equity shares and convertible preference shares of Zomato and had retained its 50.1 per cent holding in the company. This also marked the debut investment for Silicon Valley based Vy Capital in India and the fifth addition to its portfolio since July this year. Zomato has been aggressively snapping small competitors in overseas markets.

Smile Group is trying to make a comeback in the lucrative and fast growing lifestyle apparel and accessories e-com space after losing its early mover advantage when markets consolidated around the top two players—Myntra and late entrant Jabong. Fashionandyou, arguably the biggest e-commerce venture of the Smile Group which had incubated a string of internet businesses, raised a fresh and its largest round to date which could once again help it expand its business. It said it is scooping $50 million in a new round from existing as well as new investors and it secured $20 million as the initial tranche for the same this year. The rest of the money will pour in before March 2015. This came within months of the company raising $10 million in its Series D round. The fresh funding would take the total funds raised by the money to around $105 million.

Bangalore-based fashion apparel e-tailer Myntra raised $50 million (about Rs 300 crore) in a financing round led by PremjiInvest, along with new and existing investors. Post this the company was valued at just under $200 million. This came in February as the firm was desperately looking for fresh funding. However, The transaction value was not disclosed but media reports pegged it at around well over $300 million. Myntra is one of the top two fashion e-tailers in the country along with Jabong and combined with Flipkart it now has the necessary power to pump up the action further even as horizontal e-tailers Amazon and Snapdela are looking to ramp up their game in the field.

Online grocery retailer BigBasket.com, owned and operated by Bangalore-based SuperMarket Grocery Supplies Pvt Ltd, secured Rs 200 crore ($32.8 million) in its Series B round of funding from Helion Venture Partners and Mumbai-based Zodius Capital. The round also saw participations from its existing investors, including Ascent Capital; Srihari Kumar, founding partner of Singapore-based hedge fund LionRock Capital and former partner at TPG-Axon; and serial entrepreneur K Ganesh. The firm which is trying to break out in its vertical has been cautious in expanding beyond Bangalore and Mumbai but the new funding is said to be used to expand to 10 cities, including Pune, Delhi and Chennai.