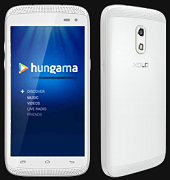 Lava's sub-brand XOLO has further expanded its range of smartphones in the country with the launch a budget smartphone. Christened Q700 Club, the device comes with IP55 certification, which basically means that it will offer protection from both dust particles as well as water splashes (at least that is what the company claims).

The company has also added dual front speakers (with DTS technology) in the smartphone, hence the name 'Club'. In addition, it is offering users free unlimited music and video downloads for three months on the pre-embedded Hungama Music app. Q700 Club will be available for purchase for Rs 6,999 in the country.

Last month, XOLO had launched two new devices running on 'HIVE' user interface, which is built on Android operating system and offers a host of new features and enhancements. A made in India, made for India platform, HIVE offers a number of customised UI elements and also allows users to join in and become a part of the development team. Christened Omega 5.0 and Omega 5.5, the devices have been priced at Rs 8,999 and Rs 9,999 respectively.

Q700 Club features a 4.5 inch IPS FWVGA touchscreen display (854Ã—480 pixels resolution) with 218 ppi pixel density and is powered by a 1.3 GHz quad-core processor. The device runs on the Android 4.4.2 KitKat operating system and comes with 1GB RAM. The internal memory of the device is 8GB that can be further expanded up to 32GB with a microSD card.

The smartphone has a 5 mega pixel autofocus rear camera with Flash that can record full HD videos (1080p) at 30 frames per second, and a front-facing VGA camera for video calling. Additional features of the camera include panorama capture, scene detection, High Dynamic Range (HDR), and geo-tagging, among others. On the connectivity front, the device has Bluetooth 4.0, Wi-Fi and 3G, as well as a microSD card slot and a microUSB port.

The dimensions of the device are 134.6mm x 67mm x 10.8mm. The company has provided a 2,000 mAh battery in the device that it claims will offer up to 21 hours of talk time and 600 hours of standby time. The smartphone also has GPS (with A-GPS support), and comes with dual-SIM (GSM+WCDMA) capability. It is available in black and white colours.