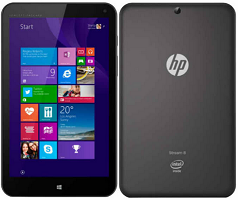 After unveiling the same in September last year, Hewlett-Packard Company or HP has now launched the Stream 8 tablet in the Indian market. The company has priced the tablet at Rs 16,990 in India. It is available for purchase on HP's online store, as well as a number of e-commerce stores in the country.

The tablet has an 8 inch IPS LED-backlit capacitive touchscreen display (1280x800 pixel resolution) and runs on the Windows 8.1 operating system. It is powered by a 1.8 GHz Intel Atom Z3735G quad-core processor and has 1GB of RAM. The internal memory of the device is 32GB that can be further expanded up to an additional 32GB with a microSD card.

Stream 8 comes with a 5 megapixel auto focus rear camera- but no LED flash- that can also record videos, and a 2MP front facing camera for video calling. On the connectivity front, it has Bluetooth 4.0, Wi-Fi, and 3G, as well as a microSD card slot and a microUSB port.

The company has provided a 4,000 mAh battery in the device that it claims will provide 8 hour and 20 minutes of video playback, about 9 nine hours of music playback, and 8.5 hours of web browsing on Wi-Fi. The dimensions of the device are 209mm x 124mm x 8.9mm and its weight is 410 gm. The tablet comes with micro-SIM support, GPS (with A-GPS support), and is available in black colour.

In April last year, Microsoft had partnered with HP to launch a tablet targeted at technical and management students in India. Christened HP Omni 10, the tablet runs on the Windows 8.1 operating system and comes embedded with syllabus compliant educational material from Pearson to ensure effective learning with homework, tutorial and assessment support, along with e-books.