Chinese smartphone manufacturer Xiaomi claims to have sold 61.12 million smartphones in 2014, recording a year on year growth of 227 per cent over the previous year. The company further reported 135 per cent growth in total sales revenues before tax, which rose to 74.3 billion yuan (nearly $12 billion) in 2014.

In a post on social networking site Facebook, Xiaomi's co-founder and president Bin Lin said, "In 2014, we have sold 61.12 million smartphones with revenues of 74.3 billion yuan before tax. That's 227 and 135 per cent growth respectively from the year before. This puts us at the top spot for smartphone manufacturer in China."

"We have successfully entered seven markets outside mainland China. This year, we will enter even more overseas markets," he added. Xiaomi had expanded its sales to regions like Malaysia, Singapore, the Philippines, and India.

Last month, the company claimed to have sold a million smartphones in India within five months of its launch in the country. Xiaomi had made its debut in the Indian smartphone market in July last year with the launch of its flagship device Mi3. In India, the company has entered into an exclusive partnership with Indian e-commerce major Flipkart.com to offer its devices. 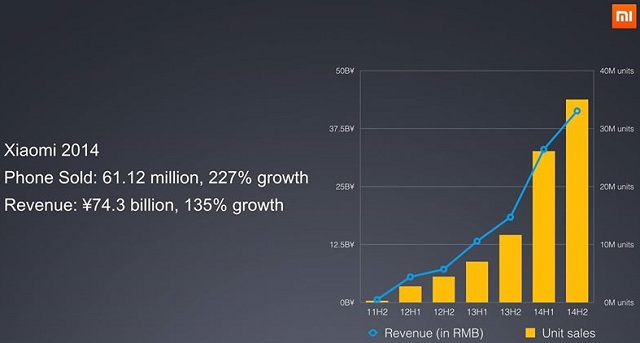 However, it has been facing patent related challenges in India. In Dec 2014, the Delhi High Court had granted an ex parte injunction order against Xiaomi for infringement of Swedish telecoms equipment maker Ericsson's patents. However, the ban was lifted within a week of granting the order, and Xiaomi was permitted to sell and import Qualcomm chipset-based (a licensee of Ericsson) handsets in the country till Jan 8, 2015.

The company has also unveiled the successor to its budget smartphone offering Redmi 1S. Christened Redmi 2, the new device has been priced at around Rs 7,100 (approximately $112). While its sales will start in mainland China later this week (Jan 9, 2015), the company is yet to reveal its date of availability and exact pricing for markets like India.

Interestingly, this time around, Xiaomi has decided to do away with the metal grey colour option of the smartphone. Instead, the Redmi 2 will be available in five vibrant colours that include white, black, pink, yellow, and green.

The smartphone sports a 4.7 inch HD IPS capacitive touchscreen display (1280Ã—720 pixels resolution) with 312 ppi pixel density. It runs on the Android operating system that has been optimised with MIUI 6. Powered by a 1.2GHz quad-core Qualcomm Snapdragon 410 64-bit processor with Adreno 306 GPU, the smartphone has 1GB of RAM. The internal memory of the device is 8GB that can be further expanded up to 32GB with a microSD card.

It has an 8 megapixel autofocus rear camera with LED Flash that can record full HD videos (1080p) at 30 frames per second, and a 2MP front facing camera for video calling. On the connectivity front, it has Bluetooth 4.0, Wi-Fi, 3G, and 4G LTE, as well as a microSD card slot and a microUSB port. The smartphone comes with dual-SIM capability and has GPS (with A-GPS support). While the exact dimensions of the device are not available, it is 9.4mm in thickness and weighs 133gm. Xiaomi has provided a 2,200mAh battery in the device.