The fund will be used to scale across channels -- online, mobile and offline besides investing in the growth of private label business.

"Supam and Amitava (co-founders) are seasoned entrepreneurial leaders who have demonstrated their ability to build and scale-up a world-class organisation. We have been highly impressed with FirstCry's leadership and believe it is becoming one of the marquee e-commerce brands in India," said Chris Hansen, managing partner of Valiant Capital Partners.

The company did not disclose who would be joining the board from the fund.

Valiant Capital Partners currently manages over $2.5 billion of assets and is associated with technology investments in both private and public markets globally.

"We plan to use the funds to focus on expanding our leadership across all channels (online, mobile and offline), as well as investing in the growth of our private label business," says Supam Maheshwari, founder and CEO of Brainbees. 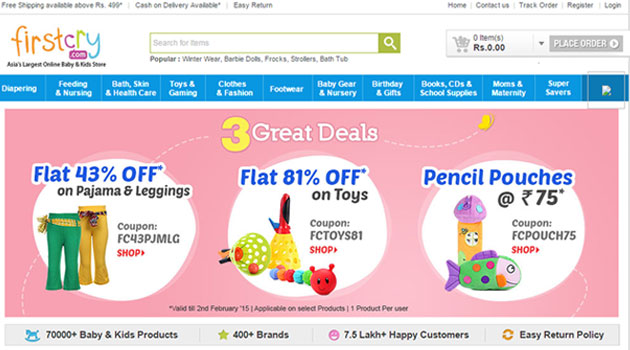 The company now also has over 100 FirstCry-branded franchisee offline retail stores across 85 cities in the country.

BrainBees has distribution partnerships with over 5,000 hospitals reaching over a million new parents across the country every year. The company is the largest multi-channel brand for baby and kids products across India.

BrainBees also owned and operated Goodlife.com, which focused on home, health and personal care items. This property was shut down last year.

It competes with the likes of Babyoye and Hopscotch besides top horizontal e-tailers such as Flipkart, Amazon and Snapdeal which also sell baby products.

Avendus Capital was the financial advisor to FirstCry for this transaction.